Rosalie had shut her eyes as she said her little prayer; and when she opened them she saw before her a little girl about five years old, in a very clean print frock and white pinafore, with a pitcher in her hand. Rosalie almost felt as if this girl had fallen from heaven. She was not a man, to be sure, and the pitcher was filled full of milk, and not water. Yet it seemed very strange that she should come up just then.

The little girl was gazing up into Rosalie’s face, and wondering why she was shutting her eyes. As soon as Rosalie opened them, she said, “Please, will you open our shop door for me? I’m afraid of spilling the milk.”

Rosalie turned round, and behind where she was standing was a very small shop. In the window were children’s slates and slate-pencils, with colored paper twisted round them, and a few wooden tops, and balls of string, and little boxes of ninepins, and a basket full of marbles, and pink and blue shuttlecocks. It was a very quiet little shop indeed, and it looked as if very few customers ever entered it. The slate-pencils and battledores and marbles looked as if they had stood in exactly the same places long before the little girl was born.

Rosalie lifted the latch and opened the door of the little shop for the child to go in. And the little pitcher went in before her.

Rosalie felt sure she must follow it, and that here she would find someone to tell her the way.

“Yes, Granny,” said the child. “And I’ve not spilt a drop—not one single drop, Granny.”

“What a good, clever little Popsey!” said Granny, coming out of the back room to take the milk from the child’s hands.

“Please, ma’am,” said Rosalie, seizing the opportunity, “would you be so very kind as to tell me the way to Pendleton?”

“Yes, to be sure,” said the old woman. “You’re not far wrong here. Take the first turn to the right, and you’ll find yourself on the Pendleton road.”

“Oh, thank you very much,” said Rosalie. “Is it a very long way to Pendleton, please, ma’am?”

“Who wants to go there, my dear?” asked the old woman.

“You want to go, child? Why, who are you going with? And how are you going? You’re surely not going to walk?”

“Why, you don’t look fit to go, I’m sure!” said the old woman. “Such a poor little weakly thing as you look! Whatever is your mother about, to let you go?”

“Don’t cry, my poor lamb!” said the old woman, wiping her eyes with her apron. “Popsey hasn’t got a mother neither—her mother’s dead. She lives with us, does Popsey. Maybe your grandmother lives in Pendleton; does she?”

“No,” said Rosalie. “I’m going to my mother’s sister, who lives in a village near Pendleton. I was to have gone to the workhouse today, but I think perhaps she’ll take care of me, if I only can get there.”

“Poor lamb!” said the old woman. “What a way you have to go! Have you had your breakfast yet? You look fit to faint.”

“No,” said Rosalie. “I have a piece of bread in my bag, but I was keeping it till I got out of the town.”

Rosalie could hear a chair being pushed from the table on the stone floor in the kitchen, and the next moment a little old man came into the shop, with spectacles on his nose, a blue handkerchief tied round his neck, and a black velvet waistcoat.

“Look ye here, Jonathan,” said his wife, “did you ever hear the like? Here’s this poor lamb going to walk all the way to Pendleton, and never had a bite of nothing all this blessed day! What do you say to that, Jonathan?”

“I say,” said the old man, “that breakfast’s all ready, and the coffee will be cold.”

“Yes; so do I, Jonathan,” said the old woman. “So come along, child, and have a bit before you start.”

The next minute found Rosalie seated by the round table in the little back kitchen, with a cup of steaming coffee and a slice of hot cake before her. Such a cosy little kitchen it was, with a bright fire burning in the grate, and another hot cake standing on the top of the oven, to be kept hot until it was wanted. The fireirons shone like silver, and everything in the room was as neat and clean and bright as it was possible for them to be.

Popsey was sitting on a chair between the old man and woman, and the pitcher of milk was just in front of her. She had been pouring some of it into her grandfather’s coffee.

The old man was very attentive to Rosalie, and wanted her to eat some of everything on the table. He had heard what she had told the old woman in the shop, for the kitchen was so near that every word could be heard distinctly.

But before Rosalie would eat a morsel herself, she said, looking up in the old woman’s face, “Please, ma’am, may my little kit have something to eat? It’s so very, very hungry.”

“Your little kit?” exclaimed the old woman. “Why, what do you mean, child? Where is it?”

But the kitten answered this question by peeping out from the child’s shawl. They were all very much astonished to see it. But when Rosalie told its story, and the old woman heard that it was motherless, like Popsey, it received a warm welcome. The pitcher of milk was emptied for the hungry kitten, and when its breakfast was over, it sat purring in front of the bright fire.

It was a very cosy little party, and they all enjoyed themselves very much. Rosalie thought she had never tasted such good cakes, nor drunk such delicious coffee. Popsey was delighted with the kitten, and wanted to give all her breakfast to it.

Popsey put a chair against the chest of drawers, and, standing on tiptoe on it, brought down the Bible from its place. It was almost as much as she could lift, but she put both her arms round it, and carried it to her grandfather. The old man cleared a space for it on the table, and laid it before him. Then, looking up at the old woman, he said, “Are you ready, Grandmother?”

To which the old woman answered, “Yes, Jonathan, quite ready,” and pushed her chair a little way from the table, and folded her arms. Rosalie followed her example and did the same. Popsey had seated herself on a wooden stool at her grandfather’s feet.

Then there was a pause, in which the old man took an extra pair of spectacles from a leather case, fixed them on his nose, and turned over the leaves of his Bible. And then, when he had found his place, he began to read a psalm. The psalm might have been chosen on purpose for Rosalie. She almost started when the old man began, “The LORD is my shepherd; I shall not want.”* (Psalm 23:1)

That was the first verse of the psalm. It went on to tell how the Shepherd leads His sheep into green pastures, and makes them to lie down beside still waters. And how the sheep need fear no evil, for He is with them. His rod and His staff they comfort them.

Then, when he had finished reading, the old man offered up a very suitable little prayer, in which Rosalie and Popsey were both named, and committed to the Shepherd’s care.

And then, when they rose from their knees, Rosalie felt it was high time she should go on her journey. But the old woman would not hear of her going till she had wrapped up all that was left of the cake in a little parcel, and slipped it into the child’s bag. After this, they all three—the old man, the old woman, and Popsey—went to the door to see Rosalie start.

Popsey could hardly tear herself from the kitten, and the old woman could not make up her mind to stop kissing Rosalie. But at length the goodbyes were over, and the child set off once more on her travels, feeling warmed and comforted and strengthened.

It was about eight o’clock now, so there was no time to lose. She easily found the Pendleton road, and the old man had directed her when she found it to go straight on, turning neither to the right hand nor to the left, till she reached Pendleton itself. She would pass through several villages, he said, but she was not to turn aside in any direction. So Rosalie had no further anxiety about the way she was to go. All she had to do was to walk along as quickly as possible.

The first part of the road lay through the outskirts of the town. On either side of the way were rows of red brick houses and small shops, and every now and then a patch of field or garden.

By degrees the houses and shops became fewer, and the patches of field and garden became more numerous.

And then, after a time, the houses disappeared altogether, and there was nothing on both sides of the road but fields and gardens.

The sun was shining now, and the hedges were covered with wild roses. Over Rosalie’s head there was a lark singing as it flew, and by the side of the path grew the small pink flowers of the wild convolvulus. Rosalie could not help stopping to gather some sprays of this, and to twist them round her hat. It was so many months since she had seen any flowers; and they brought the old days back to her, when Toby used to put her down from the caravan, that she might gather the flowers for her mother. 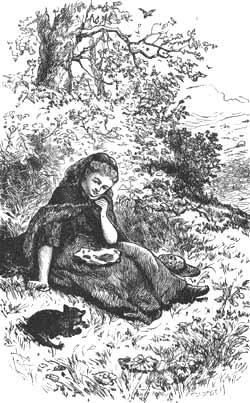 For the first few miles Rosalie enjoyed her walk very much, everything was so bright and pleasant. Every now and then she put the kitten on the ground, and it ran by her side.

Then the child sat on a bank and ate the cake which Popsey’s grandmother had given her. And the little black kit had Benjamin’s share of the little lunch.

But as the day went on the poor little kit became tired, and would walk no more. Rosalie grew tired also. Her feet went very slowly now, and she felt afraid that night would come on long before she reached Pendleton. Then the sun was hidden by clouds, and wind began to sweep through the trees, and blew against the child, so that she could hardly make any way against it.

And then came the rain, only a few drops at first, then quicker and quicker, till Rosalie’s shawl became wet through, and her clothes clung heavily to her ankles. Still on she walked, very heavily and wearily, and the rain poured on, and the kitten shivered under the shawl. Rosalie did her very best to keep it warm, and every now and then she stroked its wet fur, and spoke a word of comfort to it.

How wearily the child’s little feet pressed on, as she struggled against the cold and piercing wind!