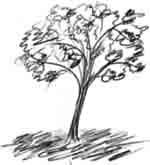 Recently, for the first time in my life, I was called for jury duty. The procedure where we live involves reporting to a large jury room at the county courthouse on a given morning. While waiting there, we were shown a video about the value of trial by jury and the responsibility of jury members. Shortly after that, a number of us (48, I believe), were called to report for a particular trial (I believe there were two criminal trials scheduled that day). We were carefully organized into a priority sequence (I was about 40th), and then led into a court room, where the first twelve sat in the jury seats, and the rest of us were lined up on benches where spectators normally sit. The judge, the defense and prosecuting attorneys, and the defendant were there. We were told what the case was about, and then we were asked a number of questions that pertained to whether we knew each other, the defendant, either of the attorneys, and then various feelings and opinions we had that might bear on how objective we might be in the case involved. After deliberating in private for a little while, the attorneys and judge returned to the room and the jurors for the case were announced. I was excused, most likely because the needed quota was selected before they got to me.

The Lord had been talking to me before and during this experience, and although I was grateful to the Lord to be excused from being in the position to have to decide the innocence or guilt of the defendant of his alleged crime, I prayed with a burden on my heart through the time I was there and afterwards that the Lord would enable truth to come out, and the correct judgment made. I was mindful that an error either way (found guilty when innocent, or considered innocent when guilty) would greatly hinder both the defendant and their supposed victim in their lives.

As I continued to meditate on the subject of judgment, and of God’s righteous judgments, the Lord brought before me the wisdom He gave to King Solomon to render wise and righteous judgment. In the incident you will find in 1 Kings 3:16-28, the king got to the truth of the matter (who was the real mother of the living child) in such a way as to awaken the highest and best motivations in the mother of the child. This woman (and the other, too) had been living low, immoral lives, but the unselfish mother’s love of the true mother of the child was stirred by the process the king used to get to the truth.

We are not told the rest of her story, but it is a precious thought that the Lord not only returned her child to her, but stirred her very best instincts and motives in the process. Did she get stirred enough to seek the Lord’s help to live a better life after this? At the very least, we can say that the Lord was giving her the best chance possible to do so. It is also true that the correct judgment stirred the people of Israel favorably. “They feared the king”—not in the sense that he was mean and likely to abuse them, but that the same respect and awe that stirs people to live better when we say “the fear of God is upon them,” was present in some measure when they considered their earthly judge.