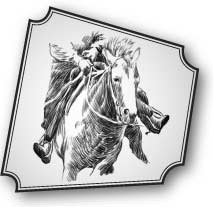 Stick with Your Horse

Like a good number of people, I’ve been fascinated with horses and riding. My own experiences consisted of five or six years learning to ride a smart old Arabian that my parents gave me when I was eleven. She knew a lot of tricks, and one of her favorites was tearing across the pasture and coming to a sudden stop with a few sharp bucks. She was telling me that riding was over for the day. Half the time I ended up agreeing, though I did learn to brace myself and keep from flying face-first into the mud most of the time. Yes, sticking with the horse was a skill you learned, or you didn’t stay on top for long. Though my horseback riding has since given place to more serious occupations, the stories of other horse riders never fail to get my attention. It was several months back that the Lord used one of these accounts to teach me how to stay on top in the job I was “riding.” This new horse’s tricks were spilling me at every turn….

It’s very frustrating to not be able to count on them, I complained to myself as I drove home one evening. I’m not going to calculate it, but I’m sure they were four hours late. After telling me all about the importance of a good routine, now this! I feel abused. They don’t care, do they? No, they’re never…

Ralph Moody, writing about his boyhood experiences on a cattle ranch in Colorado, brought to life the era when knowing your horse was the skill of manhood. At twelve, he was the youngest cowhand on the place, and had unwittingly chosen several tough characters on his horse string. Ralph had prided himself on being able to handle spirited animals. Hadn’t he learned to break and handle his own horse at age ten? Ralph had won trick-riding contests and match races, but this time he realized he had bit off a bit more than he could chew. It was the ranch manager’s prize cutting horse, Clay, that really showed up his inexperience.

With bucking horses, I’d learned to watch their heads, and to set myself to go whichever way the head turned. With Clay there was nothing to go by. His head swung back and forth to face the cow [that was being cut from the herd], and I could never guess which way the saddle would slip out from under me. All I could do was hang onto the horn for dear life, and hope I wouldn’t fall off….

It was Mr. Bendt, the ranch manager, that pointed out his trouble.

“…You’re workin’ at it too hard,” he said. “Just leave yourself foller along easy—the way your best girl does when she’s dancin’ with you.”

“ ’Tain’t the girl that counts, and ’tain’t the dancin’. It’s more the keeping time with the fiddler. Lose track of it and your a gonner; stay with it and you can’t go wrong—leastwise, not less’n you go to watching your own feet.”

As the scene flashed back into memory, I saw the relationship of the smart old cutting horse to my present trial. Suddenly the whole situation was shown in a new light. The Lord was saying, “You may be used to trusting another person’s sense of timing, but I’ve given you a horse to ride where you need to drop those skills and rely on new ones. You need to respect this flexibility with time and let go.” It was just the allegory I needed, and the frustration of a few minutes before gave way to a new wave of admiration and trust in my Manager. And greater respect for the differences of operations that He has seen fit to use.