Why God Caused a Ruckus

It was an amazing act of God, and now I can say that I’m really thankful. 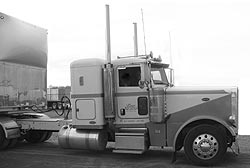 I make my living driving a truck with double-trailers. I had stopped near the end of my day to refuel at a large truck stop. Having almost run out of fuel, I was grateful to have made it to the there. I planned to drive a few hours more that night, hoping to make it all the way home.

Once I was done fueling, I pulled the truck forward and parked, facing the truck stop entryway, following the usual procedure before going into the building to get my receipt. I locked the door, leaving the lights on, and went in. After getting my receipt, I was going to do something else, but happened to look back outside. Imagine my horror as I saw the headlights of my truck coming right toward me. I tore outside as quick as I could, and leaped up onto the truck step. Facing the locked door, I frantically fumbled for the key so I could get in and set the brake. It was an awful, awful feeling—here I was, on a truck weighing 101,000 lbs. fully loaded with lumber, heading straight for the entryway of the building!

I did the stupidest thing—attempt to pull the truck back with my own strength—of course, that didn’t help anything. The truck bucked over the curb, and then plowed into the aluminum-extruded, glass-fronted entryway… ka-BOOOOM! Smashed windows, smashed doors, smashed everything! Everyone in the truck stop froze and looked out.

The truck had stopped, nose buried in the entrance. I frantically got in, turned on the engine, and backed up over the curb again. I was humiliated to no end, embarrassed, completely panicked, and my whole body was shaking. The manager of the truck stop came out and asked me if I was alright and what had happened. I asked her if she minded if I pulled the truck over to the neighboring lot—I knew there were going to be a lot of people around, and I didn’t want to do business with the sheriff right there in front of everybody, as the center of attention. She kindly gave permission, and I assured her that I wasn’t going to drive off. I pulled the truck over there, called the insurance company, and then called my office and told them what had happened.

I hadn’t set my brakes—I always do! For eight years of driving, it’s a knee-jerk reaction. There’s a button you pull out that sets the brakes. I don’t know what I was thinking—I just didn’t think. The Lord allowed me to forget, and it caused all of this. Actually, the weirdest thing about this whole matter was that when I went into the truck stop, the thought occurred to me, “Did I set the brakes?” and I answered myself, “Of course, I did.”

The sheriff was very, very kind to me. He seemed to think that it was a minor incident, since nobody was injured. Nobody was in the entrance or got injured by the shattering glass.

When that was done, I tried to calm down—I called several brothers for prayer, but only succeeded in getting ahold of one of them. Around 10:15 I headed up the road a little bit. I talked to my wife, and she helped me to see that I needed to give it over to the Lord. This was a big thing because I was beating myself up to no end. I felt like there was rest for me to obtain if I would only give this to the Lord. I reconciled myself to the fact that the Lord had allowed me to forget—that He was in charge, and He’d take care of it all. I was surprised at the rest I found—I had a really good sleep.

In the morning, I called in to the yard and they wanted me to come in so they could look at the damage (which, by the way, was very minor on the truck). As I got closer to the yard, I began to struggle again with the whole situation. I thought that I would probably lose my job over it. I told the Lord that I was ready to go through this if this was His way to move me on to another job, but I was praying that the Lord would grant me favor in the eyes of my boss. As soon as I gave up the matter completely to the Lord, I was at rest about it. When I got to the yard, I parked in the way that I usually do at the end of the day, as though I was finished.

I got out of the truck, and my boss came out with his usual serious expression on his face. He looked at the truck.

“So, do you think you are going to make this mistake again?”

“Well, I figured you wanted to look at the truck first, and then you would want to get rid of me.”

“Is that what you want?”

“Well, go fuel your truck, and carry on.”

He wasn’t unkind at all, and said, “You know, I had a truck roll on me once. If that situation happens again, jump up on your truck and disconnect that red air hose, and that will cause the trailer brakes to apply.”

“Oh, that’s a great thing to keep in mind next time.”

When you have a particular skill in a particular trade, it is easy to lean on your own experience. But it doesn’t matter how good I am at a trade, or what schooling or training or skillfulness I get, my strength and ability is of God. In the end, the Lord can allow you to make a real blunder. I realized that I needed to lean on the Lord a lot more. It really made me humble, and reconciled to that. I accepted the fact that I had made this mistake, and I’m going to ask Him and trust Him to help me not to make more.

It seemed like such a big thing that caused such a stir. That was the only way for me to really see this for my good. I know that I need to be looking to the Lord each day for strength and help to do my job—if I don’t, eventually it will catch up with me.

As I write this [2009], my mind rests on one woman we found toiling in a little hothouse. She was trying to make food and sell it to the hungry workers who were working in a relief center nearby. She looked up as we sat in the eating room and asked us, “Are you people preachers?” We said, yes, we are preachers, and that we had good news for her. We told her about Jesus and how He was ready to deliver her from sins and disease. She forgot all about her work, knelt down in the little room and prayed her soul into peace. Then she asked us: “Can Jesus heal me of AIDS?” We said, yes, for He is all-powerful and can do anything. We read Luke 1:37 to her: “For with God nothing shall be impossible” and left her to believe it and get healed. We found her in church on Sunday, telling us that she had been examined and declared free from AIDS virus. God can do the impossible. Glory to His name! Who is willing to go out and tell the good news to the lost world?

—from a minister in Kenya

A Testimony of Conversion and God’s Help

I was born into a Muslim family. My dad and mom died when I was four years old; they left me with my grandmother and one uncle. I was brought up in Muslim faith—they don’t believe that Jesus is the Son of God, neither do they believe that He is the Lord and Savior of all mankind of this world, but they believe He is just a prophet of God and no salvation can come through Him.

Just imagine, I lived in that cult faith until when pastor A—— was sent by God to reach us with the true gospel of Jesus Christ. It was that time God opened my understanding and revealed to me the secret of salvation as according to gospel of John 1:11-13; and also according to John 3:16-21. When I heard that gospel I opened my heart and gave my life to Jesus Christ as my personal Savior.

From that moment my life was changed. All the fear came out of me, and I went home and testified to my grandmother. My uncle became very bitter with me. They decided to beat me to death, but God was on my side. They didn’t kill me, but instead they decided to chase me out of their home.

On the fourth day I remembered the Word in John 15:18-19 and John 14:18, which says, “I will not leave you comfortless: I will come to you.” This Word enlightened me and I decided to look for my Christian brethren nearby. One Christian family welcomed me to their home. When I testified to them that I was a Muslim converted to Christianity, and testified to them how my family wanted to kill me, they were terrified. They reported the matter to the chief, then the village chief summoned my family to his office. When they came they were asked why they wanted to kill me. They said I broke their faith, so they count me as dead. They also said to the chief that they didn’t want me home, so they refused me before the chief. The chief said that a person belongs to the government and God, so he called pastor A—— and asked whether the church could care for me. The pastor said they have an orphanage ministry in the church so she took me in. That was January 30, 2006, when I was fourteen years old.

I thank God that through persecution and trials the Lord has been good to me, especially that I landed in the hands of a servant of God.

Since then the Lord has been a caring God for my life. I’m now in form three in a boarding school, but during every vacation I stay with my pastor, a spiritual mother and only mother I have in my life.

I can write so many wonderful things which God has done in my life, after many frustrations, which came upon me when I gave my life to Jesus. God is faithful in His word. He will not leave us or forsake us. “God is our refuge and strength; a very present help in trouble.”* (Psalm 46:1) So this is what I can tell my fellow children—to put their trust in God. God is in the midst them, God will help them all the time of troubles. Be still and know that God is in control of their lives. The secret is being obedient to God and His servants. Live a holy life and be a doer of word of God.

Finally this is my prayer request: to move with God and to know His will in my life; secondarily, for God to give me knowledge and understanding in my education because I’m approaching my exams; thirdly, that God will provide my school fees, uniform, and my daily needs.

Say hi to my fellow children and brethren; tell them to abide in the Lord and God will abide in them according to John 15:1-5.

Yours trusting in God,
—A young sister in Kenya