A Serious Battle and a Serious Victory

A brother in the congregation has a sister (his only sister) who professes salvation falsely. Over the years she has become a law unto herself, and has reached such a place, that she is now living on the streets, doing and justifying many things that are not right, writing letters and making phone calls to anyone who comes to her mind. Before this, she lived with her father, who tried to help her (although he is not saved himself). He tried to keep her employed in his business, but she proved herself completely unreliable. She devoted herself to her own version of what was right, practicing her own brand of religion, while claiming herself to be right and maintaining all others as wrong who dared to not accept her. She had found a man in the States, a false prophet, who entered into sympathy with her, and he continues to encourage her in the path that she has taken.

While living with her father, she received a request from her mother for assistance. This poor woman is possessed of the devil, but her daughter was not living a truly saved life, and had no discernment or power to deal with her mother in her condition. She refused to recognize her own inability to help her mother, sympathized with the poor possessed woman, and the spirit that was in her mother entered into her. At this point, her manner of life became so impossible that her father felt it necessary to ask her to leave his home. He did not know what to do. He provided her with a cell phone, which she uses to pour out venom upon him and any others who try to advise her or whom she perceives as opposing her profession.

Many other professors of salvation, including a large number who claim to be saints in light, have accepted her testimony until matters developed to this point. But the ugliness of her communications and the progressing takeover of Satan in her life has become so blatant that most of these people are afraid of her and have realized that something is wrong. Most of them think she is losing her mind. In the meantime, those who really walk with the Lord and love Him and reverence His ways, have become more and more grieved at the reports. She may be losing her mind, but she has already lost her soul and needs God’s salvation so much. There is nothing to do but pray. She was not and is not open to the dealings of the Spirit of God, and her course is down, down, down. We can do naught but love and grieve as her final destruction comes nearer and nearer.

One day, to the great surprise of the brother mentioned above, this sister of his called him. She started in with questions about her latest letter (a foul and horrible letter, sent by email, to a number of people). “What did he think about it?” She claimed that God was using her, although she said she regretted several things in the letter (which most definitely should be regretted). As usual, she maintained that she was right, being used of God, etc., in spite of all evidence to the contrary. The brother’s wife (who was carrying a deep burden for the soul of the one calling) began to tell her the truth about her condition, and the brother realized that she would not receive it and would end the call abruptly. At this point, he made a most serious mistake. He entered into a sympathy with that which was wrong.

His words are, “I decided to come down to her level to try to help her. She was my sister, and I love her.” At that point, the spirit that was in her entered into him. Of course, all his efforts to help her were of no avail.

Many people really wonder (mostly secretly, privately, within themselves) about the reality of spiritual things. There is a skepticism within many professors that would have received quite a shock if those doubters could have witnessed what happened next. There most certainly is a real devil. There is most certainly a whole world of spirits, both right and wrong, with which people are constantly involved. God is real! Satan is real! The experience of which we read in 2 Kings 6:17 was and is really so!

The communication of the spirit world is not even dependent on physical proximity. The brother said, “I got off the phone and looked down at the dog.” The dog could tell that the brother was different toward her. The brother had had a terrible anger in the near past, and part of that anger had been directed at the dog. She was a nervous housedog who was enough to try anyone, but God had given the brother victory over becoming angry with her. But now things were different. What was in his sister was in him, and the dog could tell. She became so nervous and apprehensive that she urinated on the hall carpet. And the brother grabbed her by the collar and threw her in the back yard. He was shocked at himself. He had had the victory over this dog aggravating him for so long that it seemed to be a settled thing.

When it was time for family devotions (the reading of a Bible story with their nine-year-old daughter), he did not want to read, as he usually did. When he decided to lie down beside his daughter to listen to the reading by his wife, he accidently fell across his daughter’s legs, hurting her. At that point, he realized with horror that he did not care if he hurt her, although before he had not the slightest desire to hurt her and had taken great care not to do so. His conviction that he was in trouble and needed help from God rose vehemently, but he could not pray. He called me for counsel and prayer. I had already heard of how he had sympathized with that which was evil out of family love for his sister, and I had been earnestly praying. My wife was aware of the matter, also. When he called, I had been asleep about an hour. “I am locked,” he said. “I cannot pray.”

We began to earnestly call on God to help. We prayed that God would free him to be able to pray. “Have you called the pastor?” we asked. No, he had not called the pastor or said anything to him, nor did he want to do so. The pastor’s wife has battles with being able to sleep, and we only call later in the night in cases of real emergency. This was a real emergency. In a short time, saints were converging on the house of this brother, and as we came, we were calling on God. There was no sympathy in any of our hearts for wrong of any kind, and we were set for his deliverance. Hallelujah!

“In uniform white on our holiness steeds,
We’ll rush to the battle wherever He leads.”*

As my wife and I navigated the darkened streets, scarcely a word passed between us. We were in perfect agreement in the Spirit, and each of us was grappling with the conflict on hand. We knew that the pastor was on his way, and all of us were in perfect agreement in the Spirit. My heart cried out to God. I wanted the spiritual weapon, the weapon of our warfare that is not carnal, that our Lord knew was appropriate and right for this fight. With great power and anointing, the words of the poet came to my mind,

“My soul, be on thy guard!
Ten thousand foes arise,
And hosts of sin are pressing hard
To draw thee from the skies.”*

Upon arrival at the brother’s house, I requested a songbook and located this song. The pastor had not yet arrived, but we felt impressed to sing that song. God anointed the song. Then we went to prayer, earnestly calling on God to hover over us, to bring things about so that the brother could be perfectly delivered. During that prayer, the pastor arrived and entered right into agreement. A deep assurance settled upon our soul that the battle was being ordered just as God would have it, and that deliverance was ahead.

We had asked the brother on the phone about checks (warnings) from the Spirit of God, and he seemed to be conscious of nothing from the Lord. We began to see that whatever hints that God had put before him, he was innocent of having ridden over any warnings from the Lord. (He also confessed to having missed personal quiet time with the Lord that morning.) This gave valuable insight into how to fight the battle. Soon God was flashing light in the brother’s mind as to just how he had opened himself to the devil. As he said, “I decided to go down to her level,” I said, “That is where Jesus did not go with you.” He paused, and the light of understanding came into his eyes. I said, “Jesus grieved that you went down there to help her. He understood your motive, but her only hope of help is to try to help her from where He stays.” This was repeated several times as the brother grasped this important truth.

The pastor related how he tried to help his sisters by responding to them on their level. He did this for years, and it was an utter failure. They received no help from God, nor was it good for him. When Jesus raised him up, he began to deal with them from what Jesus had done for him, and immediately they were not as close together as family members as they had been in the past. The closest they had come to the level of fleshly, family intimacy that they had had in the past was when one of those sisters would ask him now for counsel in doing right. Other than that, there is a great void, a gulf between them.

The brother saw where he had made his mistake. And his heart was unlocked. Praise God! His faith was inspired that God would roll back the things that had happened to him. He began to pray. As he called on God to deliver him, we were able to whole-heartedly agree. In short order, he was delivered. Great rejoicing broke out, different saints hugging each other.

“But what will I do is something else manifests itself in me?” he said. “We will take that to Jesus, too,” I replied. He nodded.

As we drove back home, the song of the little bird in Hind’s Feet in High Places kept ringing in my heart—

This little bird sang this with all his might after Jesus had triumphed in Much Afraid, and I, too, rejoiced that Jesus had gotten the victory in this brother!

Was it worth the sacrifice of part of a night’s sleep to get the victory? Oh, yes! A thousand times, yes.

“All honor to Jesus, whose eyes are aflame,
Who wondrously helps us each battle to gain;
He’s clothed in a vesture that’s dipped in the blood
He graciously shed to redeem us to God.”* 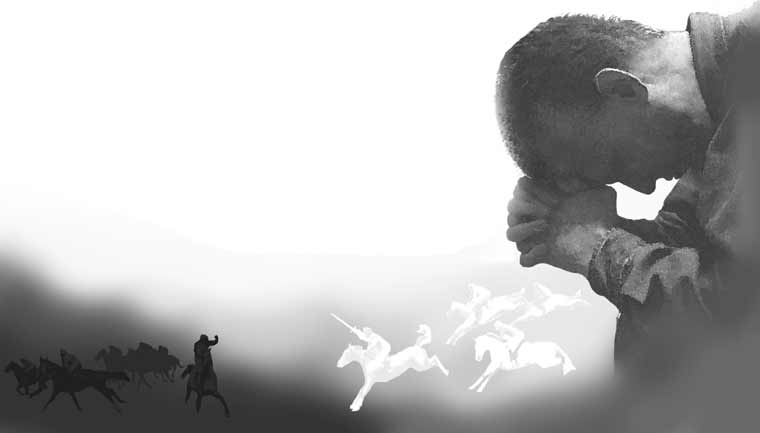