This testimony was originally printed in Above Rubies magazine in September 2000, then reprinted with the update in December 2012. We received permission from Connie Hultquist to reprint it here. 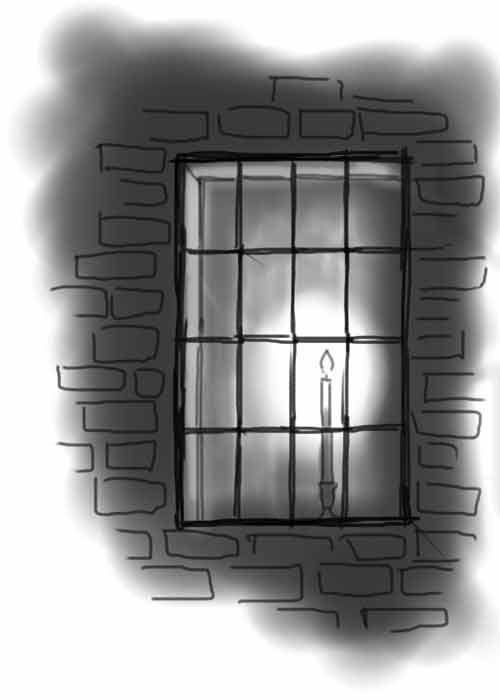 Jim and I met in 1966. He was 25, I was 18. He was wild and so was I. When we met, he had already been in and out of prison for about seven years, and was going back again for two years. We married in the prison six months later. Soon after, I had our son. A few months later I miraculously came to Christ. Because of the prison term I didn’t live with my husband for another two-and-a-half years. After being home a year he began a crime spree.

He deserted us over and over again. We had nowhere to turn except to God. No one knew where my mate was. Some of the time my heart would rage like a forest fire out of control. I would run and scream like a woman out of her mind, searching for her mate in the raging fire. I’d scream curses at God only to faint from exhaustion and weep bitter tears of repentance. I’d get back up, begin running again and fall again and again until finally I’d surrender my will to Christ’s will. And then I’d wait, maybe for another six months, knowing God was in control.

In the beginning I thought about divorce. Well, wasn’t that what a woman does if her husband leaves her repeatedly? And yet Jim kept coming back and repenting. He would mysteriously end up at my back door after being missing for four or five months, looking like a madman. But beneath the dirt and sun-parched face he was still mine.

I’d bring him in the house, give him dinner, and speak peace and rest to him. I’d run the bath water for him to wash and feel like a man again. Compassion would rise up in my heart. I had the Lord, and my Jim didn’t. I would reverence and praise him. I would shut the door on the world and be alone with my mate. No matter what he had done to me, we were still one flesh. He was my first and only husband—a terrible, ungodly, unfaithful husband, but he was still my husband. His healing came again and again as I forgave him and opened my love to him. I held nothing back.

There would be times when, putting dinner on the table, I’d notice he was awfully late. I’d listen for the car and begin running back and forwards to the window. The old familiar fear would rage, knowing that he had deserted me again. This happened about 30 times in the first twelve years of marriage. He would suddenly disappear without warning. The children would run in from play crying, “Where is daddy, where is my daddy?” I’d tell my little baby, Jimmy, “Daddy is sick, but Jesus is going to heal him.” I taught my little ones to pray, “Thank you, Jesus, for bringing my daddy home.”

His mother died and no one could find him. My prayers went out to God day and night, seemingly to no avail. The years went on and the crimes continued as if I had no God. I felt like a motherless and fatherless child. I was completely exhausted and my mate committed still another crime and went to prison for almost four years.

I loved him. I felt he was demon-possessed, yet he was my husband. And, at times I hated him. Your arms and legs belong to you even when you hurt; you can’t cut them off. I was like this about my husband. I hated it when he deserted me, but I was married to him no matter what. Adultery to me was the worst of all sins. At night before I entered my marriage bed alone I’d cry out to God to keep me pure, even in my dreams, and that I would never dream of another man.

Many mornings I’d wake up and think, “Lord, why did you give me another day to live?” Often the world seemed so black to me, but sweet Jesus would come to me and speak life and joy into my tired and depressed soul. One day God supernaturally took all my burdens away. I forgot Jim had left me. It was so hilarious. I even wrote myself a note to remember to pray for him.

The day-to-day message from the Lord was, “Now Connie, you just get up out of that bed. You straighten your shoulders and you believe God. This problem isn’t bigger than God. Don’t you prepare your day as though Jim won’t be home. You get up and prepare your home for a miracle.” Each evening when my husband was gone I’d fix supper for him and put his plate at the head of the table. No one was allowed to sit in his chair and no one was allowed to bad mouth him. I ran the house as if he were home.

I survived and lived on the Word of God. I whispered His name all day long. He walked with me in the valley of death and guided me to a straight path.

All our phone conversations at the prison were censored. I’d speak faith into the phone and say, “I’ll see you in a few days, honey.” The guards thought we were planning an escape because Jim had been given a 10-year sentence!

People laughed and said that he would always leave me and be in and out of prison. The prison guards told me that Jim was institutionalized and was hopeless. Hopeless or not, he was my husband. I knew I could never forsake the Lord by not forgiving my own husband. Also, as a young wife I wanted to be a teacher of women when I got older, and I knew I couldn’t be divorced. I’d sing, “Keep me, Jesus, as the apple of Thine eye.”

Jim was healed in 1979. After he had been in prison for the last four years and home for about three months, he asked me to have another baby, our fourth. I was so fearful I said no, I was not going to have another baby. I walked away from him and the Lord spoke to me. “Connie,” He said, “you have come this far by faith. Don’t give up now.” After much heartache I obeyed the Lord.

“Yes,” I told Jim, “I’ll have another baby for you.” I placed my future in his hands. When Jim saw that I still believed in his life as a human being, something released within him. The fear left his eyes and he was delivered. He lifted up his hands to his Father and received the anointing of a sound and unfettered mind. He began to slowly give more and more of his life to Christ. He took over the bills and began to work steadily.

The Lord did exceedingly and abundantly more than I could ask or think. He gave me joy unspeakable. Satan had come in like a flood but the Lord raised such a standard against him. All Satan did was build me a grand testimony.

God gave me a new batch of fruit. I had David in 1980, Dan in 1982, and Mary in 1985. We now have six children. I was queen in my palace. I raised the children for Christ and to honor their daddy. I taught them to jump when Daddy walked into the room. I taught them to get Daddy a cup of coffee or honor him in some way.

The guys at work say to my husband, “You don’t go out and drink and party.” Jim says, “I have a wife to go home to. I spend my time with my family.”

One guy said, “Boy, when work is over, you run home.” The guy thought something was wrong with him!

I sit here thinking of Jim and the man he is now. He has been home sitting at the head of our table for 20 years! Who is this Jesus we serve? Surely He is the Son of the living God, a God who saw me crying and feeling so forsaken, a God who knew the very moment Jim would he healed. Jim is my walking miracle to always remind me that nothing is impossible with God. He showed me that if we don’t give up we will see the glory of God.

Proverbs 3:11 says, “The heart of her husband doth safely trust in her.” A woman must gain the trust of a man such as this. His healing comes as he feels safe enough to give Christ his heart and his wife his heart. When Jim was healed, he went from not seeing me to taking care of me. He turned from Satan and took dominion over his Eve. He came into his responsibilities as a man. I come under my husband, and I don’t desire to do anything else. I don’t always agree with him, and I tell him I don’t. But in the end his word is final. I want to be as Esther and not as Queen Vashti.

Dear wives and mothers, don’t give up on your husband. God sees your heartache. He won’t leave you or forsake you if you trust in Him. I know. I’ve been to the other side.

In April 2006 my dear husband, Jim, died of a heart attack. As my six children and I gathered around Jim’s hospital bed, the hospital chaplain told me, “I have never seen a family so full of love.” As the nurse told us Jim had passed, I whispered to each of the children to comfort and love each other. As we left the hospital room I left a chapter in my life.

I wish I could say that all went well after that, but grief is hard to understand, and unpredictable. Jim and I were married for almost 40 years, my first and only husband. I still live in our family home, garden, bake bread, cook from scratch, and try to practice what I preach.

Jim would often say, “Connie and the children are what I live for, but I try to put God first. My family is my life.” When we would give our testimony to a church group, Jim would look up from the pulpit and say, “If it wasn’t for that little girl right over there, I wouldn’t be here today. She was my guardian angel.”

I now have nine grandchildren and they are a wonderful blessing. Had I given up on my husband I would have never known the joy of all these grandchildren. Praise the Lord.

Jim and I lived from one miracle to the next. To me, Jim and I were just two good forgivers, as we all have feet of clay. Our love and life together was the most gut-wrenching experience I ever had, but it was a one-of-a-kind marriage. Would I do it all again? Yes, I would. Oh yes, it was worth it all. My marriage was tried in the fire many times but I came out with a testimony of love and truth. My marriage has a message, “If you don’t give up you will see the glory of God.”