From The King’s Daughter

Gracie was fourteen, and Norma was twelve, and they were sisters. But I think that two sisters were never more unlike than were Gracie and Norma Wilson. Norma, who was the younger, was as orderly a little lady as one could wish to see, while Gracie was just the reverse.

Often their mother would say, in a despairing tone, “Gracie, I do wish you would care for your room and frocks as Norma cares for hers. Why, you go out with buttons loose, or entirely off your dress, or your frocks unmended, not to speak of the untidiness of your room. If only you would take an interest in such things it would gratify me so much. Without an orderly mind, no girl can aspire to become a useful member of society.”

Then Gracie would try to make excuses for her shortcomings, pleading this thing or that as the real cause of her negligence. But her poor mother, at her wits’ end to devise some way by which Gracie might be aroused to a sense of her duty, would shake her head and say: “Dearest child, there is no excuse for your slighting your work, either on your clothes or in your room. You have plenty of time for both and should force yourself to perform your share of the labor that falls to you to do.”

And while Mrs. Wilson was thus advising and entreating her eldest daughter to do her duty in such small household matters, Norma was busy tidying up her dainty room or sewing on her summer frocks, mending tears, or putting on buttons and hooks and eyes. She was such a cheerful, busy little miss that Gracie’s laziness even more noticeable compared with her diligence. 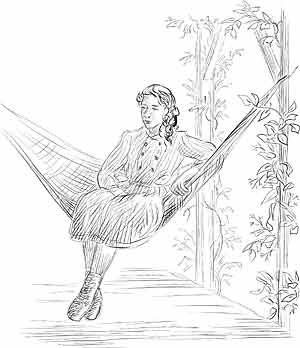 One afternoon, while Gracie was sitting idly in the hammock which swung in the broad, awning-covered porch, the phone bell rang and Norma answered it. The message which reached her ear made her smile very happily, and she answered, “Oh, yes, indeed, we shall be delighted to go, and thank you for both of us ever and ever so much. What time shall we be ready—at four o’clock this afternoon? All right. And we shall prepare some supper? Yes, all right, we’ll be most happy to do so. Goodbye.”

Then to the porch ran Norma, crying to Gracie, excitedly, “Oh, sister, Mrs. Jackson has invited us—you and me—to go with her and Flora and Tommy for a long outing. We are to stop on the beach—down at Blake Island—and have a picnic supper by moonlight. We’ll return home about nine o’clock. Won’t that be splendid? I know Mama will be so happy to have us go, so I accepted for both of us. Mama won’t be home for over an hour. And we are to start at four. It is now two o’clock. We’ll have to be stirring if we are to be ready when Mrs. Jackson calls. And she must not be kept waiting.”

“Are we to take supper?” asked Gracie, lazily, not making any sign of getting out of the hammock.

“Yes. Mrs. Jackson said we’d take it along. She said she would take sandwiches, cookies, and jelly. We can supply something else. Suppose we have some boiled eggs. And I’ll run to the baker’s and get a nice cake—one of those delicious white ones, you know. Won’t it be splendid?”

“What shall you wear?” asked Gracie, now bestirring herself a bit.

“My pink lawn, I guess,” replied Norma. “But I shall have to hurry, for the eggs must be boiled at once, so as to give them time to get cold and solid in the ice box. Otherwise, they wouldn’t be fit to take in the picnic basket.”

And away ran busy Norma to the kitchen to put the eggs to boil.

Within a short time Norma had the eggs nicely boiled and cooling in the ice box while she was getting her frock, shoes, hat, and other accessories to her afternoon attire, laid out all ready to wear.

But Gracie was not quite so energetic. She had left the hammock and gone to her own room to look over her frocks to see which one might be fit to wear. A blue dimity was selected as being in the best wearing condition, but in looking it over she found a rent in the skirt and two buttons gone. “Oh, just my luck,” she declared impatiently. “I never have a frock in shape to put right on. I do believe I’ll ask Mama—if she has returned—to sew on the buttons and mend the rent. Let me see—the hem is torn in places on my white lawn. The buttons are off my checked batiste. Yes, this blue dimity will be the best.” So taking it in her arms, she went downstairs to the sitting room.

Mrs. Wilson had just returned from making some calls and was listening to Norma’s explanation of the good time in store for Gracie and herself that afternoon and evening. “I knew you would not mind our going, Mama,” Norma was saying, “so I just accepted at the moment.”

“No, indeed, I shall not object,” said Mrs. Wilson. “In fact, I am delighted that Mrs. Jackson has invited you to go with her and her lovely children. You will have a splendid time, I know. And how about your supper? Have you everything ready?”

“I am just going to prepare some eggs this very minute,” explained Norma. “And,” turning to Gracie, “won’t you go after some cake and some fruit, sister?”

Gracie frowned. “I’ll not have the time.” she complained. “And,” appealing to her mother, “Mama, will you be good enough to fix this frock for me to wear? I’ve got to wash and comb and do ever so many things.”

Mrs. Wilson shook her head. “Gracie, you must have your lesson first or last. Now is a very good time for it. You must fix your own frock, my child. I have urged you, time and again, to keep your clothes neatly mended. If you let your things go—well, you must suffer the consequences. And, you must assist Norma in preparing the supper. It is not fair that she should have the bulk of the work of preparation to do. You must shoulder your share of it.” 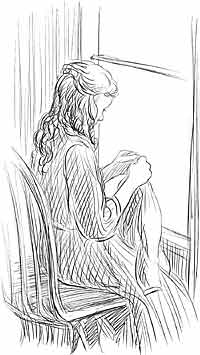 Gracie, her face burning with shame, went upstairs and began to fix her frock. But hardly had she begun when her mother’s voice called to her: “You would better go for the cake, daughter, before sitting down to mend. If by any chance you should not be ready to go when Mrs. Jackson calls for you, Norma must not be disappointed and shall have her basket of supper ready.”

Gracie began to beg off, but her mother was firm. “Do as I say, daughter, and start at once to the baker’s for the cake. Stop on the way back and buy a bag of nice fruit.”

Gracie had to obey, but did it reluctantly. She feared she would not be ready to go when four o’clock arrived, for there was so much to be done in preparation. She hurried to the baker’s and got the cake; stopped on the way back home and bought a bag of fruit. But she saw by the town clock that there was only forty-five minutes left until it would be time to start on their trip.

For a moment she felt very much out of sorts over the fact that she had been obliged to go after the cake and fruit, but the longer she thought of it the clearer became her own fault. Yes, she had been very indifferent about her work. And if she missed getting the trip—well, it would be her lesson.

As soon as Gracie gave the cake and fruit into Norma’s hands she ran up stairs to fix her frock. Norma was all ready, looking as sweet in her fresh lawn frock as could be. The basket was prepared for the supper, lined with a soft white napkin. Into the basket Norma put a dozen nicely prepared eggs, wrapped about with white paper. Then came the cake, also appetizingly fixed in dainty fashion; then the yellow oranges, luscious, pink peaches and golden yellow pears.

At precisely ten minutes before four Norma was waiting on the porch. At exactly four Mrs. Jackson’s car came driving up.

“All ready?” called out Mrs. Jackson.

Just as Norma was about to offer some excuse for her tardy sister, her mother came upon the porch, and, after chatting in a cordial manner for a few moments with Mrs. Jackson, she told Norma to take the basket and get in the car. “It is Gracie’s own fault that she is delayed this way, and she’ll have a lesson today that she will profit by. I am quite sure she’ll never miss another picnic through her own idleness.

Then, while Norma was getting into the automobile, Mrs. Wilson spoke in low tones to Mrs. Jackson, explaining why Gracie would not be able to go on the outing that day. Although all expressed regrets that Gracie was to be left behind, they knew it was for the best that she be taught a lesson through disappointment.

As the car drove off down the road toward Blake Island, carrying the happy picnic party, Gracie, with tears in her eyes, stood looking from the window after them. And in her heart she knew that her disappointment was due to her own shortcomings. And she determined to do better from then on.