Harry, what is the matter?” said his mother, one day, as he ran in from school, and throwing down his school bag, commenced crying passionately. “Have you been kept in?”

“No, Mama, but the boys have been laughing at me, and I can’t stand it. I wish you would let me go to some other school.”

“What did you do to make them laugh, Harry?”

“They asked me to go with them and tip a poor woman’s apple stand over, and said it was first rate fun, and that Robert Bell had plenty of pocket money to pay the damages.” 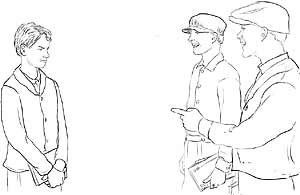 “I said my mother would feel dreadfully to have me do such a mean thing. And then they laughed, and Robert Bell said, ‘Does your mother know you are out?’ and another boy said I was ‘tied to your apron string.’ Then they called me a ‘tattletale,’ and said I was going to ‘tell the teacher’ on them, and when I said, ‘I have never been brought up to tell tales,’ Robert Bell called out, ‘There’s his mother again. Three cheers for Harry Reed’s mother!’ I felt angry enough to knock him down!”

“Keep calm, my boy,” said Mrs. Reed. “Come, sit down, and let me see whether you have any reason to be so excited.”

“Oh, Mama, you don’t know how provoking it is to be laughed at, or you wouldn’t say so.”

“If Mother doesn’t, I do,” said Henry’s father, who had come in just in time to hear his story. “And I know a better way than knocking down.”

“Have true courage, my boy, and don’t notice their laughter.”

“What kind of boy is Robert, Harry?” said Mr. Reed.

“He is a new scholar, his father is rich, and he has plenty of money in his pocket every day.”

“No, sir. Our teacher told him today that he was more trouble than all the rest put together.”

“I suppose if you were a man, you would fight a duel with Robert Bell, and one kill the other.”

“When grown-up people feel as you did today, when you wanted to knock Robert down, they sometimes meet and shoot at each other with pistols, because they won’t stand being laughed at. It takes more real courage, my dear boy, to do right in spite of ridicule, than to fight. I hope you will show yourself a truly brave boy.”

For a while things went on pretty smoothly with Harry, but one day he came home looking flushed and unhappy. He sat down to dinner, but just as he had begun to eat, he laid down his knife and fork, and leaning back in his chair, said, “I am not hungry, Mama.”

“Have you been eating something, Harry?” 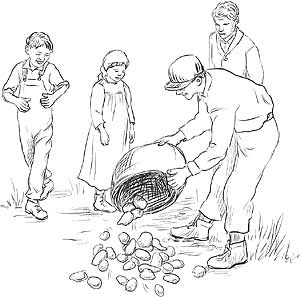 “No, Mama—but Robert Bell acts worse than ever. I wish you would let me fight him.”

“Today we were playing ball, and a little girl, no bigger than our Matty, came by with a basket of potatoes as heavy as she could carry, and Robert Bell tipped it upside down, and scattered them into the gutter. The little girl cried out loud, and as I started to go and pick them up, Robert began to laugh, and said, ‘Go help your sister, Harry!’ ” 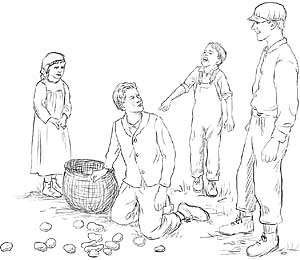 “My dear Harry, your fear of ridicule has made you do wrong already. You fear man more than God. If you begin to sin because you’re afraid of being laughed at, there is no telling where you will stop. I have known young men who have started out in life with good principles. But they began associating with wicked companions, and, rather than have their friends know that they are obeying a good mother’s counsel, they yield to temptation and go to ruin.”

“I have felt sorry all day, every time I have thought of that poor little girl, Mama.”

“Well, Harry, then take a bold stand on the side of right, and make up your mind you will not do wrong, even if you are laughed at.”

“Mama, I have not told you half the trouble I have had today. My piece to recite began, ‘Mother, when I learned that thou wast dead.’ I found it in the new book Uncle Edward gave me. I knew it by heart, but as soon as I said the first line, I saw Robert Bell winking and laughing. It put me all out, and I forgot half of it, and spoke so poorly that Mr. Lee told me to memorize my piece perfectly next time. I’ll know better than to try that piece again.”

“Harry, are you going to let Robert Bell make you ashamed of your mother?”

“No, Mama, but I’m tired of trying to get along. After school, the boys went off swimming. They begged me to go, and said Papa was away from home and never would know it, and you wouldn’t care. I knew better, and refused a good many times without giving any reason. At last Robert came up and said, ‘His mother won’t let him,’ and they went off singing, ‘Mother, when I learned that thou wast dead!’ Now, Mama, how can I stay at such a school?” 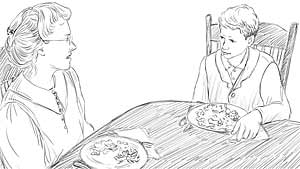 “Harry, you may find the same trials at any school, and after you leave school, and all through life. Wicked young men will seek to lead you astray by laughing at your mother’s influence and instructions. Now, my boy, what are you to do? Will you yield to the fear of ridicule, and commit one sin after another until you are as bad and perhaps worse than those who laugh at you, or will you rise above it, and show a true Christian courage? If you can’t bear it now, you will find it still harder when you are a man in size, and when your evil passions have strengthened. Pray to God to help you, and when you find that the boys want to make fun of you, just go on doing right. They will soon see your firmness, and let you alone. Think of this: if Christopher Columbus had been like you he never would have discovered America.”

“Was he ever laughed at, Mama?”

“Yes, Harry. He had to bear a great deal of ridicule before he could persuade people that he was anything but an crazy adventurer. When he tried to prove the existence of undiscovered land beyond the sea, he was laughed at and persecuted in many ways. He did not mind it, but went on and accomplished his discovery, and silenced his adversaries. He is now a revered and honored man.”

“Maybe not, my dear boy, but everyone can imitate Christ. Wicked men clothed Him in purple robes, mocked Him, blindfolded Him, and smote Him in the face. They laughed at Him, and shook their heads at Him when He was dying. He never became angry, though His slightest wish could have destroyed them. He prayed for His cruel mockers with His last breath. Now, Harry, if you will pray to Christ, He will make you a brave, manly Christian, and you will be thankful, as long as you live, that you learned to bear ridicule in your youth.”

“Dear Mother, I will try to remember all you have said.”

“Do, my boy, and when you are older, you will be able to resist the temptations which you will meet in every effort to do right, and come out of it all a truly courageous man.”

Harry did not forget his mother’s good advice. He feels very sorry that he let that little girl sit and cry, when he might have picked up her potatoes. He has never shown such cowardice again. If he goes on as he has begun, the school boys will find laughing at Harry Reed is very unprofitable business, and will be obliged to seek some other means of amusement.