Byron had not yet discovered the wonderful life-line that had been cast to him by the loving hand of the Savior. He was still clinging, as it were, to a part of the wreckage of his past life, and his soul was in constant danger of being swept away either by the rising tide of discouragement or by the whirlwinds of temptation. God, by His Holy Spirit, was endeavoring to show him his only hope of safety and the things that had hindered him in his former efforts. But as yet he could not understand.

As they drove in through the gate, Byron drew a deep sigh of relief. It seemed so good to be at home again. Home was now to him a shelter from the tempestuous storms that were without—a haven and a place to rest. Mother understood. She asked no questions. They were not necessary. In morning worship, however, her prayers were a real source of comfort, for Byron realized that she was not talking into space with no one to hear. He knew too much now about that silent Listener—who is ever ready and waiting to carry a message either to God or to some loved one—not to understand in part the value of a mother’s prayer. 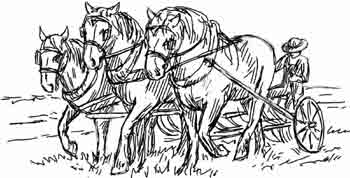 During the week and the days that followed, Byron found plenty to occupy his time and thoughts. The farm work was very pressing; and as he toiled day after day in the field, his mind became filled with a new inspiration. He saw, as never before, his mother’s responsibilities in caring for her family and discovered that it was not only his duty but his privilege to help her bear this burden. The thought seemed to arouse and cheer him, and his efforts became very noticeable and praiseworthy. But underneath this outward show he carried a burden which at times was almost unbearable and of which he could not rid himself.

One day while he was in a back field at work, the team needed a rest, so he climbed up as sat on the fence for a bit. With his jackknife he began whittling a small piece of wood, while the tired horses stamped and twitched at the flies that troubled them. Byron soon became buried in deep thought. His past life came before him as a book, and he read it page by page. He began with the early years of childhood, and the sweet memories thrilled him through and through. In those days his mother was all the world to him. He could go to her then with all his little troubles, and her word and kiss would brush them all away. As he read on in this imaginary book, he found that he had not maintained the same tender feeling and that a time came when he ceased to carry his troubles to mother. “But why should I,” he reasoned. “I did not want to burden her unnecessarily.”

Ah, that was not the reason. Reading on, he found that the voice of his conscience had often reproved him as a worthy pilot would a captain who was running his vessel into dangerous waters. His conscience had endeavored to pilot him in the right way, but his dear friend’s counsel he had ruthlessly cast aside and to the gentle pleadings he had turned a deaf ear. He had not told his mother about his troubles, and her good advice given from time to time he had not heeded.

Some of the pages were full of trouble, and yet many had appeared as nothing to begin with, but which soon grew to be black, ugly mountains. He could now see how gently his mother had tried to lead him, how careful she had been lest some word of hers should cause him to think her harsh or unkind. He realized that he had misjudged her. The more he read, the more he could see that, although he had only continued along this path little by little, the results were certain. Each sin had led to a greater one.

He shuddered as he read the account of the stolen eggs. It was all there in black and white upon the pages of this memory book—the sudden flight of the hen, the burning sensation of the eggs upon his hand, his trip into the loft with them, his removal of the eggs; then to the grocer’s remarks and the miller’s story later on. Oh! why had he been so blind? Had he a right to a part of the produce that he had helped to raise? Yes, indeed, he had, but in no such way as that! He should have gotten his share with the rest and in an honorable way.

Little by little his wrongs came before him until he had reviewed his whole life. He now plainly saw that his recent trouble with the boys was only the outcome of his disobedience and the result of his smaller sins. He saw, too, that those sins had robbed him of his innocence and happiness, and that was why he was without rest or comfort.

He was a guilty sinner, lost on the ocean of sin. The wreck of his former self was stranded upon the mighty rock of Hope, but was liable to be swept away any moment by the waves of despair. He could see the Savior’s lifeline, but it seemed so far away. He would have been glad to grasp it, but the effort seemed too great.

Poor Byron! He had endeavored to drown his feelings with hard work and had found it an impossibility. It could not be done! He felt that he was unable to raise himself out of his trouble by his own strength that unless he obtained salvation his life was ruined. The words, “Have mercy upon me, O LORD, for I am in trouble,”* (Psalm 31:9) flashed across his mind. His mother had read them in worship that very morning, but they had not appealed to him then as they did now.

Springing down from the fence, he quietly knelt down upon the soft ground and tried to pray. But all that he could do was to repeat the words of the psalm, which his mother had read. He was indeed in trouble, and he had never realized it so keenly as he did at that very moment. Oh, if only he had someone to whom he could unburden his heart!

In this state of mind he spent the remainder of the afternoon in the field, and when he returned to the house at the close of day, the load upon his heart had grown heavier, and his sufferings were almost greater than he could bear. 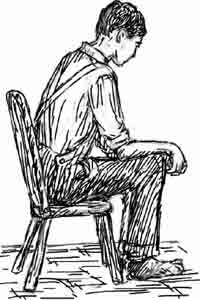 That evening he took a seat upon the porch as the golden streaks were fading away in the western sky. The scene before him was indeed beautiful, but he saw it not. He was looking away into the future and wondering what it held in store for him. “Oh, for the power to look beyond those hazy gates and read my own destiny,” he sighed. Sitting thus in the twilight, with no definite purpose in view, he began to wish that something would happen to break the monotony of his thoughts, which were becoming almost unbearable. While he waited and thought, he heard a step behind him. Turning, he saw his mother approaching. She took the chair beside him.

She had noticed the sadness in her son’s face from day to day, and as she saw it constantly deepening, she longed to see him happy and free again, as he used to be when a child. Realizing that nothing except full salvation could bring this to pass, she daily prayed for his conversion. Her mother heart was yearning to see him reach out and grasp the life-line that was being held out to him, before it was withdrawn, and ere he was swept away again into the billows of sin.

At first they talked only of the crops, the weather, and the probable harvest. Then a silence fell between them. It was one of those times which are so keenly felt because each, knowing the other’s thoughts, waits for the other to break the silence.

“Byron,” his mother finally said, “there is to be a series of meetings held in our neighborhood chapel, and they will begin next Sunday. A minister and some helpers and singers are to conduct the meetings. I am earnestly praying that God will grant us a profitable meeting. I feel sure it will be a source of help and inspiration to each one of God’s children who will attend. And,” she added, “I am praying that it may be a benefit to those who have not accepted Christ as their Savior, as well. I want to attend every service and should be pleased to have you to go with me.”

The talk was continued long after darkness had covered the earth with its mantle and the stars were peeping out of the sky. There in the solitude of the night the confidence between mother and son, which had been broken, was restored. The mother found that her son was longing for that which she had been desiring him to possess, and her heart was cheered. The painful wound that she had received through his disobedience was instantly healed when she found how close the Savior had been to him that very day.

When Byron went to his room that night, he knelt beside his bed and tried to pray, but his words seemed to fall back upon his heart as lead. It seemed that he could think only of the coming meeting. And when he fell asleep, and he dreamed that he was in the chapel listening to a very touching sermon.

When Sunday came he was eager to go with his mother. It was for quite a different reason than he had once had. Before, he thought only of the boys and of the good times he expected to have in their company. Today he was eager to go in order to learn how to give his heart and life to God and become a whole-hearted Christian. Sinful pleasures and disobedient actions had lost all attraction to him, and he longed for the comfort of a conscience that was void of offense.