From The King’s Daughter and Other Stories for Girls

Line after line she penned, making many a mistake, for her thoughts were far away. At last her mother, who was sitting near her, said, “Amy, this is the third time you have spelled pleasure without a ‘p,’ and left out the ‘f’ in afterward. Put down your pen and tell me what you are thinking about; for I am sure it is not of your copy.”

“I was only thinking,” replied Amy, “how glad I should be if my copy said, ‘Pleasure first—duty afterward.’ It is very hard always to have the disagreeable part first. I wish I could have one whole week with no duties at all! How I should enjoy myself!”

Mrs. Leslie remained silent for a moment; then she said, while a quiet smile played round her lips, “Well, Amy, for once you shall have what you want. For a whole week you may amuse yourself; no duties, mind, my child—none at all.”

“There is no chance of my wanting any, I assure you, mamma,” said Amy, joyfully; “I shall be so happy—you’ll see!”

“Very well, then,” said Mrs. Leslie; “you may begin tomorrow. Today I shall expect you to do as usual.”

Amy said no more; she finished her copy, learned her lessons, then went to the nursery to take charge of her little brother while the nurse was busy with other work. Afterward there were socks to mend, and an errand to run, and buttons to sew on to baby’s shoes, and a letter to write. And so the day passed, and the next morning dawned on our pleasure-loving little friend.

“No duties,” she said to herself, as she woke at seven, which was her usual time for rising; “so I can lie in bed as long as I please.” She turned over and as she could not sleep, began making plans for the day, and thinking what a delightful time she would have. About half past nine she came down stairs, to find her breakfast on the table: milk, toast, and egg, all as cold as possible. “What a wretched breakfast!” she said, as she took her seat.

“Well, dear,” replied Mrs. Leslie, “your breakfast was ready at the usual time, and of course it is cold now.”

Amy said no more. She ate with only half her usual appetite, and, finishing in about five minutes, left the room. As she went upstairs to fetch her hat, Baby in the nursery stretched his arms for her to take him, but she hurried past, and left the little fellow crying with disappointment.

Soon she came down again, with a fairy book in one hand, and a box of chocolate drops in the other. The sweets had been a present, but thereto her mother had allowed her to have only one or two daily; now, however she might do as she liked, and at present her idea of perfect bliss was the combined charms of chocolate drops and fairy stories.

For about two hours she sat in the garden; then she grew tired, and a little sick from eating too much chocolate, and was returning to the house, when her pet kitten ran out to meet her. For a short time she amused herself by playing with it, dressing it up in her pocket handkerchief and carrying it like a baby; but Miss Pussy wearied of this, and at last jumped out of her new dress and her mistress’ arms, leaving a scratch as a keepsake behind her.

Altogether, the morning was hardly a successful one, nor was the afternoon much better. After dinner, one of Amy’s little sisters tore her dress, and was running to Amy to ask her to mend it; but Mrs. Leslie said:

“Don’t go to your sister, my child, come to me”; and little Jessie, wondering, let her mother darn the rent. Amy felt very uncomfortable, for she knew that Mrs. Leslie’s eyes were not strong, and were probably aching with the effort of such fine work; but she shrank from offering her services, and made her escape from the room as soon as she could. 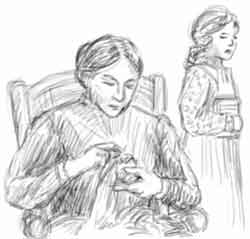 In the evening she was about to draw her chair to the fire and read the newspaper to Mr. Leslie, a duty of which she had always felt rather proud; but her father gravely took the paper out of her hand, saying quickly, “No, Amy, this is a duty; remember you are to amuse yourself and do nothing else.”

Amy’s eyes filled with tears, and she ran up stairs to her own room. She had no heart to read the fairy book, or to make clothes for her doll, or to play with the kitten, or even to eat the rest of her chocolate drops.

“I shall never be able to bear another day of this,” she said to herself; “I thought it would be so delightful to have no duties, but somehow my play does not seem half so good as it did before.”

The next day brought no real pleasure and comfort. Listlessly Amy wandered about, having no zest for any of her former amusements, and feeling thoroughly unhappy. She began to long for the duties which had seemed so irksome to her; she could hardly keep from tears when she saw the others busy over lessons, or her mother doing work which had formerly been hers.

At last her misery ended in a fit of crying, and shutting herself up in her own room, she gave way to it. Sob followed sob so quickly that she did not hear the door open, until her mother’s arms were round her, and her hot, aching head was pillowed on her mother’s shoulder. Not a word passed between them for a few minutes; then Amy sobbed out, “O Mother! Mother! The copy was quite right, ‘Duty first, and pleasure afterward’; for without duty there is no pleasure at all.”