A Drink of Cold Water

“Daniel, Mrs. Shutter has to go be with her sick mother today. I suggested that Brad and Larry could stay with us. How would you like that?” Mom asked. “They could help you with weeding and fixing the chicken yard fence this morning.”

“I don’t think they like to work,” Daniel said slowly. He thought of the two redheaded neighbor boys and sighed. Larry was his age and Brad was two years younger. All they liked doing was arguing over toys or playing Nintendo.

Mom only smiled. “Most children don’t like to work. If you ask Jesus to help you be cheerful and set a good example, I’m sure they will see it is not that bad.”

“Besides, the more hands make the lighter work,” added Irene, looking up from her desk.

That is just the sort of thing a big sister would say, Daniel thought. With Larry along I think it will be more work. He always likes to make trouble. 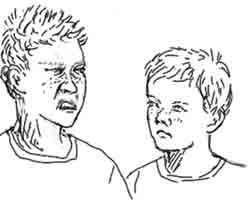 Daniel didn’t have long to worry about extra work. Mom was still talking about the Shutters when their car pulled in the drive and the two boys got out. They didn’t look too happy when Mom opened the door to let them in.

“It is good to see you, boys,” she said brightly. “Daniel will be working outside this morning and I thought you would like to help him.”

Larry looked at Brad and wrinkled his nose. Daniel tried to smile. “Come on, you haven’t seen our new batch of chicks,” he said, leading the way out the back door.

The boys laughed at the chicks when one took off with a fat worm, but then Brad wanted to catch it. “No, we’d better get the weeding done first,” Daniel said. “Mom wants the weeds in the flower bed pulled out.”

“Your mom makes you work? I thought it was summer vacation,” Larry grumbled. He didn’t move when Daniel got the garden gloves and trowel. 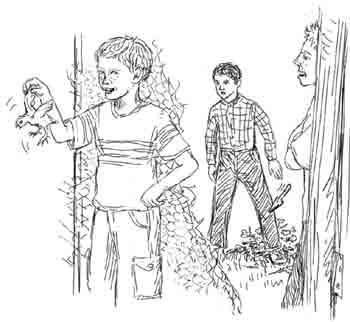 “These gloves are too big,” said Brad. “And I can’t get my clothes dirty. They’re new.” He walked over to the chicken yard fence and leaned on it. Daniel ignored them and began pulling weeds as quickly as he could.

Loud chirping made him look up. Brad was holding a chick by one wing and grinning. “Hey, Larry, look at this!” he said, and tossed the chick into the air. It flipped several times and flapped wildly before tumbling into the grass.

“Don’t!” cried Daniel, jumping up. “Don’t you know that you could hurt it or maybe kill it? You don’t dare touch those chicks again!” He felt angry with Brad, but Larry’s laughter made him madder. They looked like two mean, red foxes. If they had tails I would tie them together and set them on fire like Samson did, he thought. That would teach them a lesson or two.

Would it teach them to do right? Are you being a good example? Daniel gritted his teeth and looked at the ground. He still felt the anger rolling around inside and he knew he didn’t like those boys one bit. How could he?

“Ha, Daniel, I dare to!” Larry said, climbing through the broken place in the fence. “You can’t stop me. You’re just a sissy!” He picked up a rock and sent it after the big rooster. Brad went after another chick and the flock scattered in panic.

Daniel’s face turned red. Why don’t you give them a punch or two? They deserve it, a little, angry thought said. It was a temptation that he never felt before and Daniel was a little bit afraid. Jesus had said that he shouldn’t fight those that did wrong, but love his enemies. Did he believe Jesus? Oh, God, help me to do right! Daniel prayed.

“What’s wrong, Daniel?” Rosie’s clear voice came from the back door. Daniel felt like yelling back, but he took a deep breath instead. Rosie ran over to stand beside him. “Can’t you stop them?” she asked, nervously.

Daniel thought quickly. He knew the boys wouldn’t listen to him, but he had to do something. Jesus said to give your enemy a drink, he remembered.

“Do we have any lemonade or juice popsicles?” he asked Rosie above the ruckus. The Shutter boys looked up. 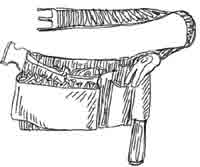 “Maybe Mom would let us have some after we get our work done,” Daniel said. Larry glared at him, but Daniel smiled. He suddenly remembered that Larry wanted to be a carpenter.

“Hey, Larry, I have a real carpenter’s apron you could use, but I don’t suppose you could do a fix-up job with it. It’s kind of hard.”

“You think I’m a sissy?” Larry said, marching up to the fence.

“Let me see it.” Larry pushed his way back through the fence and followed Daniel to the shop. The apron was just his size and held nails, tacks, wire, a carpenter’s pencil and a claw hammer. Daniel could see that Larry was impressed, though he tried to hide it.

“I’ve seen better ones, but I guess it could do the job. What needs to be fixed?”

“Oh, just tacking the wire back up on the chicken yard gate,” Daniel said, turning back to the flowerbed. He noticed that Rosie was holding a little chick and showing Brad how to pet it. He smiled. Maybe things would turn out all right after all.

“Have any half-inch board strips?” Larry asked from behind him. He was studying the hanging fence and seemed almost friendly.

Probably because I am, Daniel realized. “Yeah. On the other side of the back porch you might find some,” he said, picking up the trowel.

“Hey, Brad! Carry this board for me,” Larry called a moment later.

Brad was ready to complain, but Rosie said eagerly, “Can I help, too?” In a moment they were having a race to see who could work faster. Larry looked pleased to be the boss and kept the other two busy pulling staples and holding wire.

Daniel couldn’t help being a little impressed. “That looks really nice,” he said. “I guess no chickens will get through now!” Or red-headed boys, he thought.

“Not with all the staples we put in,” Brad said, proudly.

Rosie had disappeared, but in a moment she was back with Mother and a container of popsicles. “My, what hard workers you have been this morning!” Mom said as she looked over their work.

Larry grinned as he took a popsicle. “It wasn’t that bad.”

“Not if you give your enemy a drink,” Daniel whispered. Rosie smiled.