Storyline taken from Runaway to Freedom, by Barbara Smucker

Julie and Lisa have been promised a safe escape to Peace Land, but can they trust the way the Liberator has chosen to send them?

As our cart lurched to a stop that misty evening, I heard a strange rumbling and puffing sound. “It must be the train Mercy told us about,” I heard Lisa whisper. I remembered the power and speed of the black engine that had passed us only the other night. What would it be like to travel the Believing Train? I felt excitement tingle through me.

“I’m passing in two mortifying sacks,” said the Liberator in a low voice. The back curtains parted and something rough and scratchy slapped down beside me. “Step inside and pull them up over your heads. You will be traveling as my cargo tonight.” 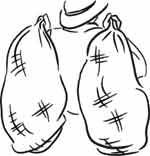 The sacks were anything but comfortable. I was thankful for the protection of my new clothes, for the burlap was scratchy. Someone tightened the cord over my head and I was lifted by strong arms. Lifted like those bales of hateful fluff we used to pick back in Sinful Misery. I buried my face in my sweater and tried not to panic as the mortifying sack pulled close around me.

The rumbling of the train grew louder and I then I felt myself being swung up onto something flat and cold. I got one breath of air before the sack pulled tight and I was being lifted again. Through the hollow clang of footsteps I was relieved to hear Master Love’s quiet voice. “You’ll ride in the corner of this provision car. Once we leave you may loosen the cords and get some more air. The train will take you to the border, but you must remain inside the sacks until you get there.”

We were set down against some boxes and soon the train began to shake. The rumbling grew louder and doors clanged, and then with a shrill whistle we were off! Jerk-jerk-jerk. The wheels moved faster and faster and I felt something lurch into me. Lisa groaned softly, and then spoke. “I guess—I guess we are going pretty fast anyway.”

I didn’t reply. If this was the price of freedom, I was determined to pay it.

It was the clanging of the stopping train that awoke me. My back ached and I felt stiff, but my heart skipped when I heard a man’s voice say, “I’m here to pick up two sacks sent from Redemption this morning.” It sounded like Master Good, the wonderful stranger who had found us on the Hate-Good plantation and helped us escape! “Ah, here they are!” he called out. Footsteps came near and suddenly we were being lifted again. The good man had kept his promise to take us into the land of freedom.

In the safety of his carriage Master Good released us from the sacks. But was it Master Good? In the Liberator’s house we had heard about his capture and imprisonment for the cause of freedom. The eyes that looked at us now held the confidence that I had remembered, but pain and sorrow had left their marks.

“Julie, Lisa,” he said, and a smile lit his face. “Praise God, you are here at last!” As a kind father, Master Good poured refreshing water for our thirst. “Drink slowly. There will be more when you board the Deliverance,” he told us.

The carriage lurched and Lisa clutched the seat painfully. “Freedom isn’t easy,” she murmured, and looked at Master Good’s scarred hands. “Even you have been in trouble and don’t look so well.”

Sadness came to the strong man’s eyes, and he said quietly, “I was taken from prison and from judgment; for the transgression of my people have I been stricken. Sinful Misery is cruel and the way of deliverance comes at a high price.” Then he smiled at us. “But it has been worth it to bring you both into freedom.”

The words seemed to lift me up, and I thought again of the wood-do-right where we had all started out. “Adam and George?” I asked, fearfully. “Have they made it to freedom?”

“Yes, they both got to Peace Land,” Master Good answered quietly. “They both knew freedom.” I held my breath, uncertain of his meaning. “George has a job and is waiting for you… but Adam died just two days after his deliverance. The rusty chains had weakened and poisoned him.”

In the painful silence, I couldn’t help brushing away the tears. “I hate those cruel, horrid chains! I just want to break them off the legs and arms and neck of every slave!” I said fiercely. One face kept coming up before my eyes. But how could I ask about my dear mammy now? I was afraid to know if the price of freedom had cost her life, too.

“The Deliverance is sturdy little ship,” Master Good’s voice broke into my thoughts. “She will take you over the border to Peace Land. Pull your salvation scarves over your faces and come with me.” He leaped from the carriage and offered each of us a hand.

A brisk cold air blew across wide gray water as we stepped onto the dock. I was glad for the warmth of my sweater and Master Good’s strong arm to hold onto. It had been a long time since I had walked on my own feet, and I felt a shiver of excitement go through me.

“Tickets for my two daughters, please,” I heard Master Good say. It was a pleasure to know we belonged to him, though Master Good himself would not be with us on the journey. We were left in a cozy little cabin under care of the Captain, a friendly man with a strong handshake.

“Tomorrow he said we would be in Peace Land,” Lisa murmured, slumping down in one of the bunks.

We were so used to the tension of being hunted, that I wasn’t really surprised when the Captain knocked softly on the door. “Trouble aboard, lassies,” he said, and growled. “Hateful scamps those slave hunters! Better duck under the lifeboat until they clear off.”

“I’d rather jump overboard than be found,” I whispered, as we huddled down on the hard deck planks. The search party was going through the cabins and we could hear the Captain’s angry shouts.

“I’ll never go back—never be a slave again,” Lisa said. We clung to each other and to the promise we had made so long ago in the slave shed. Master Good had been true to his word, and we were almost there. Anything was better than going back.

As I listened to the muffled clangs of the searchers, I felt angry. What right had they to chase us to the boarder like two runaway dogs? I would not submit to chains again. 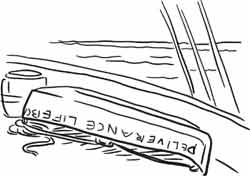