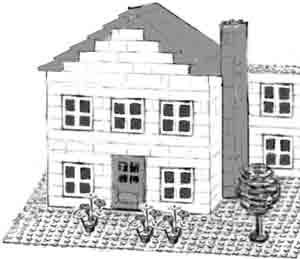 “There!” Daniel sat back on his heels to inspect the Lego house he and Rosie had been building. “I think it’s the best one we’ve ever made.”

“It’s pretty,” said four-year-old Emma, leaning close to admire the tall red chimney and white-framed windows. Kyle, who was only two, grinned and waved a Lego in the air.

“Don’t touch!” Daniel shot a warning look at the two little watchers and carefully picked up the house.

“Wait a minute!” Rosie called, diving back into the Lego box. She came up with a handful of flowers and lined them up by the front walk. “Now it’s perfect!” she said, smiling with satisfaction. “Let’s show it to Chad and the others, now!”

“No,” said Daniel, stowing it away on the shelf, “let’s save it till Dad gets home.”

It wasn’t until Bible story time, before bed, that Daniel remembered the house. He wanted to go get it, but Dad was reading and so he knew he must sit still and listen. The story was about Joseph and his brothers, and how they had thrown him in a pit and sold him away as a slave. Daniel had heard it many times before, but still liked it very much. He imagined how he would be brave and good like Joseph, if he was a slave.

So it was the next morning before they got their chance to show the Lego house. After they had finished washing the breakfast dishes, Daniel said, “Come on, Rosie. Let’s go get the house!”

They hurried to the school room, but stopped short at the door. In the middle of the floor sat Emma and Kyle with the house. Kyle’s hands were full of Lego pieces.

“Oh, no, no!” Rosie wailed, and ran to snatch away the broken house. Kyle looked up in surprise, and Emma began to cry.

“You naughty children!” Daniel cried. “I told you not to touch it!”

“What’s going on here?” Dad said, stepping into the doorway. 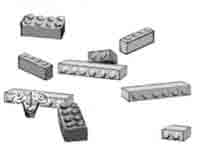 “They just wrecked it—our Lego house we made,” Daniel said bitterly. “And it took us a whole week to make it.”

“It was the best one we ever did, and we were just going to show it to everyone,” Rosie sniffed.

“And they weren’t allowed to play with it,” added Daniel. His throat felt tight and he wanted to cry.

“I’m sorry, but it looks like you put it in the wrong place,” Dad said, patting him on the shoulder.

“I was just looking at it,” Emma began, tearfully, “but Kyle came and—”

But Daniel turned away and hurried from the room. He didn’t care what she said; Emma was a bad girl and very, very naughty! And Dad didn’t even scold her. Daniel ran to his room and buried his head under his pillow.

Soon he heard the door open and footsteps come up to the bed. Daniel lay very still and pretended to be asleep.

“Daniel, I know this is a disappointment to you,” Dad’s voice said gently. “But do you really think a Lego house is worth crying over?” He sat down beside the bed. “I know you spent a long time making it, but it would’ve been taken apart anyway. You wanted to show it to us, but sometimes things don’t happen the way we would like. We need God’s help to forgive others when they do wrong to us. Remember Joseph?” Daniel thought of Joseph in that dark hole. He remembered how his big mean brothers had sold him as a slave.

“Joseph could have been angry and bitter towards his brothers,” Dad continued. “But by God’s help he was able to love them instead. It was like being a knight and killing a big, green dragon.”

Daniel peeked at Dad from under the pillow. Was he just being funny?

But Dad continued seriously, “Imagine if a dragon was trying to eat Emma. What would you do? I know you feel mad at her now, but imagine if a big, green dragon came along. If you could, you’d fight him off, wouldn’t you?” Daniel thought of big, green dragons and knew what he would do.

“I would get a big sword and chop off his head,” he said, pulling off the pillow.

“Even if Emma really meant to wreck your house?” Dad asked. “You might really need to ask God to help you love her. You see, being angry and hating someone is like a big dragon. Only by love can you kill it.”

Daniel was quiet. If Joseph was able to forgive some big, mean brothers, he should be able to forgive a little, naughty sister. But he really liked that house, and she shouldn’t have touched it. Forgiving her was so hard.

“Why don’t we pray?” Dad said. He knelt down beside the bed and prayed first, and then it was Daniel’s turn.

Daniel took a deep breath and began, “Dear Lord, help me to love Emma.” He thought of the broken house, but went on, “And help me to forgive her even though she broke my house. Amen.”

“How about that dragon?” Dad asked with a smile, when he opened his eyes.

Daniel smiled back. His heart felt light and happy now. “I think it is quite dead,” he said.