Letter to a Little Princess

Now that your jewel of patience is growing rapidly, I hope, are you ready to add another jewel to your golden dress of obedience? One of the most beautiful jewels that you can have is the Gem of Quietness. It sparkles in a veil that covers the princess from head to toe. The princess looks very royal wearing this veil over her golden gown. But not many princesses wear one, because it is expensive. You see, a princess must give up some things she likes to wear it.

There was once a princess, named Karen, who had four younger brothers. One day when she was feeding the chickens, she found a tiny white kitten nestled in the hay. Karen scooped up the cold little kitten, and it mewed hungrily. At the house Mama helped her find some milk for it. Karen hoped very much that she could keep it. Her brothers had always wanted a dog, and Daddy said they needed one more than a cat, but he let her keep the kitten. Karen was so happy! She took good care of her new pet and took it with her everywhere. Karen decided to name the kitten Snowball, because it had pure white fur.

Then, one day, visitors came with two little boys. Karen was sent to watch all the boys play outside, so she carefully shut Snowball away in her room. For awhile they played nicely, but then they began to get into mischief. They kept popping from behind the house and laughing at her. Karen felt discouraged, and hot and tired. She wished she could be inside. “Why do I have to watch the boys anyway?” Karen thought, as she sat under a tree and waited for them to come back.

In the pond! Karen rushed out to see, but she did not find Snowball. Karen felt angry at Tommy—how did he get Snowball anyway? She found him in the sand pile. He did not look happy when she asked him about the kitten, but he pretended he didn’t do anything.

“Yes, you did! Tony said you put her in the pond!”

“Well, I—uh—put her on a lily pad, ’cause we wanted to see if she’d float. But she couldn’t, and well, I guess she fell in and we couldn’t get her out. Mom doesn’t let us go in the pond, you know.”

Poor Karen! She felt like hitting Tommy and yelling at him for being so mean! Snowball had drowned. Big tears filled her eyes. Then a soft voice whispered, “Remember your Crown of Love?” Blinking back the angry tears, Karen asked God to help her love Tommy. And do you know? Karen didn’t feel like hitting or yelling at Tommy anymore. Over her Crown of Love had been slipped a beautiful shining Veil of Quietness and Karen felt all peaceful inside, even though she didn’t have Snowball anymore.

Karen had to give up feeling angry at Tommy and love him, before she could get her Veil of Quietness. Sometime you too may have to give up something like Karen did. You’ll have to ask King Jesus for Love first, because Love always comes before the sweet Veil of Quietness. 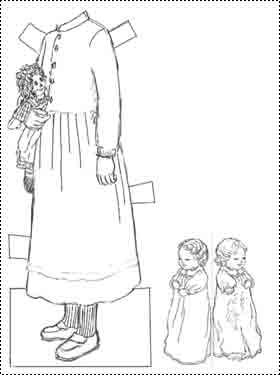