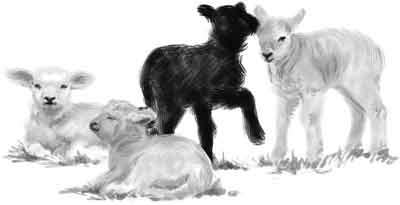 Cocoa Puff came to the sheep ranch when she was one week old. “The only black lamb in the flock,” said the master with a smile. “With a mind of her own,” said the master’s wife, when she brought out the milk bottle. “Just see how she butts her way around!”

It was not long before Cocoa Puff knew every cobwebby corner in the barn and every bend in the pasture fence. The other sheep soon got used to her and let their little white lambs join in the wild games that Cocoa Puff thought up. Some days it was chase-my-tail and jump-over-the-bucket. When it rained and they had to be penned up in the barn, she found perfect places to hide under the hay feeders. Cocoa Puff loved being the leader. She loved being important. But often her wild ways would get her into trouble.

“Where’s that black lamb?” asked the master’s wife one day. “I’ve called her to come for her milk, but she’s nowhere to be seen.” Poor Cocoa Puff was stuck under the hay rack! She had crawled there in one of her hide-away games, but it was getting a bit small for her now. “Baa! Baa!” she called until the master’s wife came to pull her out.

The next afternoon Cocoa Puff was trying to squeeze through the pasture gate when she got her leg tangled in the latch-chain. “Baa! Baa!” she called. The master came tromping down the lane to rescue her. “Now listen, Cocoa,” he said, as he lifted her up. “You aren’t to be squeezing through the fence. It’s not safe out here for little lambs like you.”

Cocoa Puff tossed her curly head and rolled her eyes. She couldn’t see anything dangerous outside the fence. Running down the lane would be so much fun! But she stayed in the pasture and played with the other lambs like a good sheep. For a little while at least. But Cocoa Puff, the black lamb, didn’t like to be quiet and good very long. 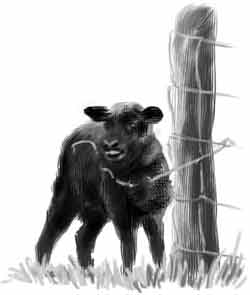 It was a twisted wire that she got caught in next. She had been wanting a rubbing, and the master’s wife had been too busy to give her one. The corner fence post by the pond had looked like a good spot to itch. Except, when Cocoa tried it, she got herself snared by a loose wire. “Baa! Baa!” called Cocoa Puff. But no one heard her. So she kicked very hard and twisted her body this way and that until the wire finally snapped.

“Baa! Baa!” cried Cocoa Puff, with a gleeful jump. She ran off to join the other lambs. It didn’t matter that the sharp wire was still tangled in her soft wool. After all, it was fun to be noticed and have everyone admire her bravery. The master would get her all fixed up at supper time.

“Cocoa Puff has been in trouble again,” said the master’s wife that evening. “This time she’s got a limp.” It was true. The wire had caught across her shoulder and it was beginning to hurt terribly. Cocoa Puff didn’t say anything when the master pulled her close in his strong arms. His fingers found the wire and carefully began to untangle it from her wool. Then, with a leap, she was free again. Being a naughty black sheep wasn’t so bad, was it?

It was on a stormy night that Cocoa Puff learned the truth. All week the sheep had been out in the far pasture. The lambs were all big enough to eat grass like the older sheep now, and the master only came out once a day for an evening visit. Cocoa Puff usually thought that was the best part of the day, for she loved special attention. The master would rub her round sides and scratch her behind the ears. Sometimes he would even let her lick salt off his fingers. But today Cocoa Puff had been more interested in finding a way out of the fence than enjoying the taste of salt.

She knew the master wouldn’t like it. But why should she mind that? Cocoa Puff was so used to having her own way that she had begun to be quite sure that her own way was best. On that summer afternoon the gurgling road-side ditch seemed the best place of all. Cocoa was thirsty. The water bucket was way back at the gate and the black lamb was feeling lazy. She didn’t want to walk across the hot meadow when there was plenty of cool fresh water right in front of her. The only problem was that it was on the other side of a barbed wire fence. 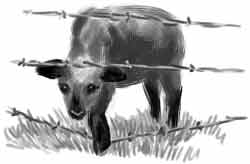 Cocoa Puff first tried lifting the lowest wire with her nose. The fence didn’t budge. Next she tried shoving her head underneath. A sharp barb scratched her cheek and she gave up on that. There must be some way through! Cocoa Puff stomped her foot impatiently and managed to get one leg over the lowest wire. The gap in the fence was wider now and the lamb soon had her head and neck through. With a heave the black lamb was on the other side, and tumbling down the bank.

It was a thicket of blackberries at the edge of the ditch that caught her. She tried to pull herself free, but the sharp thorns stuck to her wool. The more she kicked and tugged, the more tangled she became. And thirsty. She couldn’t even reach the water in the ditch.

Cocoa Puff began to feel frightened. “Baa!” she called. No one answered. All she could hear was the gurgling stream. Far off there was a rumble of thunder and the little lamb noticed how dark the sky had become. A storm was coming. Why had she been so determined to have her own way? Why had she not obeyed?

Then, far off, she heard the master’s voice calling, “Come on sheep!” He must be leading them all up to the barn for shelter. Suddenly Cocoa Puff felt very lonely indeed. Would the master care that his black lamb was missing? She had caused him so much trouble that he was probably glad that she was gone!

A cold gust of wind shook the reeds and a few rain drops began to fall. Cocoa Puff’s legs were scratched and bleeding. She was stiff and tired, and she couldn’t even lay down. It was no fun at all to be a naughty sheep. Oh, how she wished that she could be safe in the master’s arms again! But she had gone her own way and there was no hope now.

Then Cocoa Puff thought of something. Perhaps the master would come looking for her! It was getting colder and darker. “Baa! Baa!” she called. A dog howled back. Cocoa Puff had never liked being in the dark by herself, and she trembled. A big hungry dog might like to eat a little lamb that was on the outside of the fence. Would the master find her before it was too late? “Baa!” the black lamb called again.

“Cocoa Puff? Where are you?” Across the pasture she could hear the master calling!

She tried to call back, but the splashing rain seemed to drown out her voice. Oh, would he find her down there in the dark thicket? She called again.

The master’s wife must be searching, too. “Did you hear something down by the ditch?” she asked. 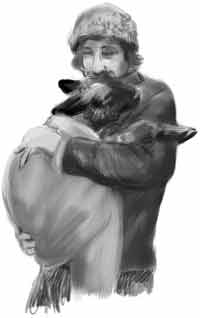 “Baa!” Cocoa Puff called as loud as she could. Then she heard a wonderful shout. They had heard her!

“Yes, there she is!” Her master called joyfully to his wife. “Shine the light so I can get her out!” A flashlight beam shone over the fence and into the bramble patch where the black lamb lay. In a moment the master was climbing over the fence. With his long shepherd’s staff, he pulled Cocoa Puff gently out.

It felt so good to be wrapped warmly in his coat, going home. The master had wanted her enough to go looking for her in the dark and cold. How truly he must love her! And how much better it was to trust the master than to have her own way. Cocoa Puff lay her curly black head against his shoulder and sighed happily.