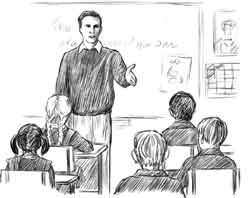 “So what is religion?” The teacher asked, stepping in front of his desk.

The room full of children didn’t make a sound. Slowly the teacher lifted a finger. “It is a way to believe when you do not know the answers!” he said loudly. “God is like a stick to lean on, when you are old and weak.”

Eight-year-old Natasha frowned. The teacher had it backwards. Father wasn’t old and weak. It was God who had made him strong, when all the doctors said that he would die. But the teacher was still talking, so Natasha kept quiet.

“Why should you believe in God when you are smart? You have a mind to think! Don’t be lazy and stupid!” The teacher clapped his hands together and then pointed to a boy sitting in the front row. “Kolya, do you believe that God is real?”

Kolya shook his head. So did Katya and Larissa, Natasha’s best friends.

“Well, you are a good student,” the teacher said quickly. “You believe what you have been told. But how can we prove there is any power that you can not see? Our Soviet Union is strong because of the minds and power of men, not by the idea of an invisible ‘God.’ It is time to study.”

Chairs scraped as the children got out their copybooks. Natasha worked hard, careful to write each answer neatly. She loved to study and the words flowed easily onto her paper. Why does the teacher think that only stupid people pray? Natasha wondered. I am at the top of my class, and I always pray. It is God who has been so good to give us our minds to think!

The weeks went by and Natasha stayed at the top of her class. At the end of the term, the teacher read the names of those with perfect marks. “Natasha Petrova,” he said, and smiled at her. “We also have some students with excellent marks: Pavel Ivanov, Larissa Sokolova….” Natasha smiled at her friend, but Larissa’s back was toward her and all she could see were her thick blond braids.

One morning the teacher was late to class. Natasha slipped into her seat as the bell rang. She was thinking over her words for the spelling test when a loud “bang” startled her. Sasha Fokin had jumped off his chair and was whistling loudly.

“Yipee! We have no teacher today!” another boy said, and several girls giggled. 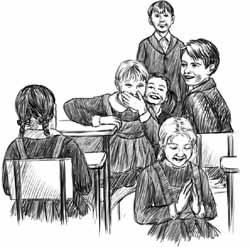 Natasha sat still, her hands folded in her lap. She saw Larissa and Katya look her way, then put their heads together. Suddenly Larissa got up and walked over. When she was next to Natasha’s desk, she dropped to her knees and pressed her hands together. Shutting her eyes, she began to murmur some words like she was praying.

Natasha was so surprised that she didn’t move. Katya covered her mouth and Kolya snickered. “Natasha prays to God,” he chanted. “How smart she must be!” Sasha and the others laughed loudly.

Natasha didn’t know what to do. She almost wished that she could disappear. Why is Larissa making fun of me? She wondered.

Larissa jumped up, laughing and swinging her braids. She was just slipping back into her seat when Pavel hissed, “Teacher’s coming!” In a moment everyone was quiet and classes began as usual.

Natasha was glad to put her mind on her studies. Larissa didn’t talk to her the rest of the day, and when school was over Natasha walked home alone. She usually walked home alone, but today she felt more alone than usual. Why did Larissa act like that? she kept thinking. We were always friends before. Now she doesn’t even talk to me. 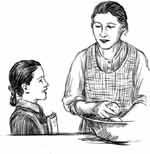 “Mama!” Natasha called as soon as she entered the warm kitchen. “Mama, today the teacher was late and Larissa pretended to pray in the middle of the floor!”

“Pretended to pray? What do you mean?” asked Mama, looking up from the pan of potatoes that she was peeling.

The words came tumbling out as Natasha told what had happened. “Why did Larissa act like that? She made all the other children laugh at me,” Natasha said at last, wiping a tear from her eye.

It was good to feel her mother’s warm arm around her shoulders. “Larissa does not know God,” Mama said slowly. “When we pray, we know that we are talking to One who really hears us and loves us. We know that He will answer. But Larissa does not know Him, so that is why she made fun of praying. We must ask God to show her that He is real.”

So Natasha and her mother prayed for Larissa. And how much better it made Natasha feel inside! God would show Larissa that He was real. Natasha was sure of it.

It was not long before the summer holidays began. Soon the dark picture of that terrible day at school faded in Natasha’s mind. In the happy, free days of sunshine and no studies, Larissa and the others at school were almost forgotten. Only when she knelt to pray, Natasha would remember to ask, “And Father in heaven, please help Larissa to know that You are real.” 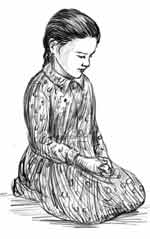 Time passed quickly, and before Natasha realized it another school year was approaching. “I must pick some flowers to take to my teachers today,” Natasha told her mother, the first morning of September. “I can’t wait to see all my friends! Won’t we have so much to tell each other?”

Mama smiled. “I can tell that you are excited. With so much to say, will you be able to pay attention to your work?”

“Of course, I will try my best,” Natasha said, grabbing up her copybooks.

“That is good,” said Father. “Before you hurry off, let us pray. You will need God’s help to be a good student and show love and respect to your classmates and teachers.” As Natasha bowed her head, she was very glad to know that God was there. And she knew that He heard and answered prayer. Again, she whispered a request for Larissa.

The tall brick building was filled with noise and excitement as the children gathered that morning. “Did you know that I flew on an airplane?” Katya was telling the other girls when Natasha arrived. “Yes, and we stayed one whole week with my cousins in the city!”

“I spent the whole summer with my granny,” said another girl. “And guess what? Her white cat had five kittens!” 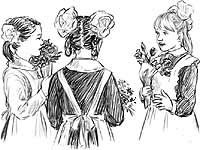 Natasha was eager to tell all about how her cousins had come to visit, but she tried to wait patiently. “Well, I will tell you what happened to our kitten,” Larissa was saying. “It climbed up the chimney and got stuck. We had to pull it out with the garden hoe, and oh it was the dirtiest thing you ever saw!” The others laughed.

All too soon the bell was ringing and the children had to hurry to their classes. The teacher smiled at all the bright flowers laid on his desk. “I know that you have many more things to talk about,” he said. “But let us save our stories for later. We will begin with review lessons now, and see how much you remember after the long holiday from studies.” Heads were bent over their desks and soon only the sound of scratching pencils could be heard.

The next few days were busy ones. Besides receiving new copybooks for each school subject, Natasha also had begun lessons in music. The piano teacher had a room at the end of the hall where each piano student went at their scheduled time. Natasha’s lesson was just after the noon break, and Larissa’s lesson was after that. As they passed in the hall one afternoon, Natasha noticed that her friend’s face was very downcast. 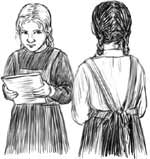 “What is the matter, Larissa?” she asked. “Aren’t you ready for your lesson?”

Larissa shook her head. “I did not have time to study, so I am surely going to be in trouble and receive a bad mark,” she said. “Even when I practice, I can never please him.”

“Maybe he will be patient with you this time,” said Natasha hopefully. Larissa shrugged, and Natasha hurried back to class.

The next day, at morning break, Natasha was putting her desk in order when she heard Larissa say excitedly, “You know, God really exists! He is real, for I found it out just yesterday.” Everyone in the room turned to stare, and Natasha’s heart beat quickly as she looked over at the teacher. But Larissa didn’t seem to mind and told them all what had happened.

“When it was time for my piano lesson yesterday afternoon, I was not ready at all,” she began. “Now I knew that the teacher would scold me and give me a bad mark. No matter how hard I try, I can not please him.”

“Well, I was just going to my lesson when I passed Natasha in the hall,” Larissa continued, turning to smile at her friend. “She tried to cheer me up, but I could not feel sure that it would turn out well. Then suddenly a thought came to my mind. What if God, in whom Natasha believes, really exists? Would He help me with my lesson?” 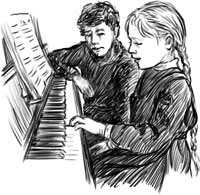 A warm glad feeling filled Natasha’s heart as her friend went on. “So I called out to God in my heart, ‘If You are real, please help me with this lesson.’ That is all I said, but I guess He heard me!” Larissa laughed. “When I sat down at the piano, I was so surprised! My fingers did everything I wanted them to do, and my teacher was very pleased. He gave me an excellent mark.”

Larissa looked around before she continued with a look of wonder in her happy face. “Of course, I never would have dreamed of doing so well in my whole life! So I know it was God who helped me, because He heard my prayer.”

Everyone was silent as they thought about what Larissa had said. Of course, Natasha was happy. She had never expected God to answer her prayer in this wonderful way. Just think! The same girl who had made fun of prayer in front of everyone had stood up bravely to tell how God had had heard her request. What did the teacher think about a pretend God now? But the teacher didn’t say anything, and in a moment the bell rang for the next lesson.

Natasha took out her copybook with a smile. No matter what anyone thought, God was real. She knew she could trust Him with everything, no matter how big or impossible it seemed.