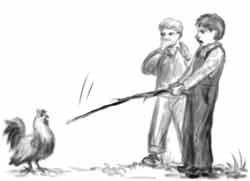 When Dylan Was Afraid

Dylan wasn’t a “scaredy-cat.” Certainly not! He loved to climb the front maple tree and swing like a monkey. Cousin Justin was afraid to do that. And when the big rooster came running, Dylan would whack the ground with a big stick and scare him away. “You don’t need to be scared of him,” he told Justin. “Old Red is just a show off. He’s really afraid of me. Let’s go see if Henny Penny is sitting on her nest.”

Dylan was brave about hard work, too. If big Brother Joe stacked wood or carried grocery sacks for Mother, Dylan did it, too. One time he dropped a box of canned vegetables because it was too heavy. Clankety-bang! The cans rolled all over the driveway. “I’ll pick them up!” Dylan said quickly. And two by two he took those cans to the house and put them on the shelf where they belonged. No, Dylan wasn’t a shirker, even if he was just six years old.

Strangers didn’t scare Dylan either. In fact, Mother had to discipline him one day because he talked to the delivery man when he should have been cleaning up. “You must always ask before you start talking to someone you don’t know,” said Mother. “Most strangers are kind, but some might want to hurt a little boy.”

“Why?” asked Dylan. He liked to ask questions.

“Because they listen to the devil and he tells them to do mean things,” said Mother. “When you obey, you will be kept happy and safe.”

Dylan thought about that. “Does the devil talk to everyone?” he asked.

“Why, yes,” said Mother. “He will whisper bad ideas to anyone who will listen. But there are two voices. God’s Spirit always tells us to do what is right. I hope my little boy will always listen to the right voice.”

“Was it the devil that told me to hit Katie when I was mad yesterday?” Dylan asked.

“Yes, I’m afraid that you listened to him that time. But you were much happier when you were sorry and treated your sister nicely, weren’t you?”

Dylan nodded. “I know what the devil is saying right now,” he told Mother. “He is saying that I should play and not clean up my toys. Bad devil!”

“What is Jesus saying?” asked Mother with a smile.

“To do it quickly!” shouted Dylan, as he ran off down the hall.

Dylan thought about the two voices all day. It helped him to remember to do right and obey. Whenever he thought about complaining or being unkind, he would imagine a black little devil whispering to him. “I will not do that!” he said, and in his mind he whacked the bad idea like he had whacked Big Red.

That night Dylan had his first nightmare. He had never been afraid of the dark before, but suddenly, in the middle of the night, he sat up with a frightened cry. It seemed that a giant black hand was trying to grab him and take him away. He jumped out of his bed and ran to his parent’s room.

“What is the matter, Dylan?” Daddy asked.

“I’m scared! Something bad is trying to get me,” Dylan sobbed. He hid his face in the blankets. Daddy’s strong arm reached around him and Dylan felt safe again. But he didn’t want to go back to bed. “Come, I will tuck you in,” said Daddy.

“You won’t leave me?” asked Dylan, clinging to his hand. 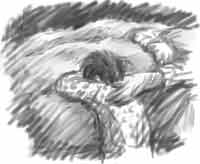 “God will never leave you, so you don’t need to be afraid. I will sing a song,” said Daddy. His low voice filled the dark room as he slowly rubbed Dylan’s back. “Oh, how He loves you and me!” he repeated over and over. Dylan thought of God and it seemed like he must be a bit like Daddy. Strong and kind and good. Soon Dylan began to feel sleepy and before he knew it, it was morning.

The next night the nightmare came again. This time he was sure the blackness was the devil and his heart beat very fast. “Daddy, Daddy!” he called. “I’m scared!” Again Daddy sang until Dylan felt safe again and could fall asleep. 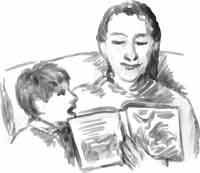 At nap time the next day, when Mother was reading him a story, Dylan asked her about it. “Mom, is the devil in charge of the night? He seems so very big and bad when it is dark outside.”

“Is that why you were scared last night?” she asked. “The Bible says that the devil is the ruler of the darkness, but that is talking about the darkness of sin. The devil wants you to do wrong and be scared. God is bigger than the devil and he says that you don’t need to be afraid if you trust and obey Him.”

Dylan snuggled down into his covers. “I’m not scared in the daytime. Only when it is dark outside.”

Mother gave him a kiss. “Tonight we will pray that you will not be afraid in the dark, either.”

That evening Daddy read Bible verses about trusting God in the night. “You see, Dylan. God is our refuge, which is like a safe hiding place,” said Daddy. “That is why we don’t have to be afraid of ‘the terror by night’ as this Psalm says. In verse four it says ‘under his wings shalt thou trust.’ We are safe when we trust Him.”

“You can just imagine,” added Mother, “that God is like a giant mother hen.”

“Bigger than this house?” asked Dylan.

“Yes, much bigger. And when it is dark, remember that He is there protecting you, just as if you were a baby chick.” 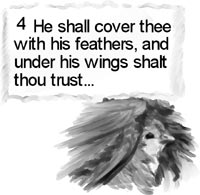 Dylan thought about that. “I know!” he said happily. “It is just dark because of God’s big feathers. Now I will not be afraid any more!” And he wasn’t.

The next week when Cousin Justin came to play, the boys went out to the chicken yard. “Whack, whack! I’m not scared of you, Big Red!” shouted Dylan. He led the way to the shed where Henny Penny had hidden her nest.

“Oh, there’s a baby chicken!” said Justin. Sure enough, a little fluffy chick stood next to his mother. The boys crouched down to look, and Henny Penny puffed up with a warning cluck! 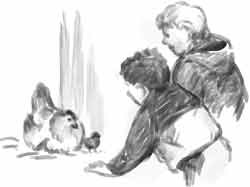 “Yes,” said Dylan, with a big smile. “It’s night-time for him, but he’s not afraid of the dark. His mother’s feathers keep him safe.”

“I used to be afraid of the dark,” said Justin.

“Did your Daddy sing to you and tell you about how big God is?” asked Dylan.

Justin shook his head. “I just hold onto my Eddie and he keeps me safe.”

“Is your Eddie stronger than the devil?” asked Dylan.

“I—I don’t know,” Justin said slowly. “But the devil scares me too much. So I decided he wasn’t real.”

“But he is real,” Dylan insisted. “He tells bad people to do bad things. My Mom said so. But I’m not scared of him anymore, because God covers me with His feathers every night. Just like Henny Penny’s chick!”

As the boys watched, a little brown head poked out from under Henny Penny’s wing and looked at them. “I’m not afraid,” it seemed to say.

Dylan smiled. “I’m going to tell everyone that Henny Penny has chicks. Race you to the house, Justin!”