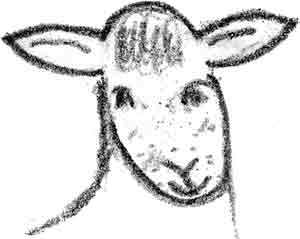 This year I’ve had an experience that taught me how to trust in God more.

It all started when one of my bummer lambs bloated. I had heard lots of stories about bloating, but I didn’t know how serious it was. I went out late one Sunday evening to feed them. As I was walking to the barn, I started calling them. Mary, the female, started bleating loudly right away. But as I listened, I could only hear her. Funny, I thought to myself as I started climbing our fence into the pasture. I opened the barn door and to my utter dismay, there was my other lamb, Joseph, lying flat on his side. His stomach was enormous! “Oh, you poor thing!” I said to him. I offered him the bottle, but his foamy mouth told me right away that he didn’t want it. I picked him up and brought him up to the house to Mama. “He is most likely not going to live,” she said, sadly. We tried to give him a mixture to break down the gas, which was crushing his insides. It was very hard for me to see him suffer. But despite all of our efforts, he died.

The next morning I went out to feed Mary. When I opened the barn door, she was bloated worse than Joseph had been! No! I about screamed. Not her! She’s the only one left. Mama said she was willing to call the vet to see if anything could be done. The vet said that something could be done alright, but it would cost a lot of money that we didn’t have. Then, they said, that she might have a chance of living, but most likely not. The vet also told Mama that most bummer lambs don’t make it past four weeks, if they didn’t have colostrum. My lambs were just the right age, and they hadn’t had colostrum.

After hearing all that, I looked down at Mary who was laying in my lap. There is just no hope, I thought. But then God told me that I was putting my trust in the vet. I realized that our situation could change if I trusted in God. I told Mama about my feelings and she said to take it to God. Mary was hardly breathing, but I prayed that God would do what He thought best. If it is possible, please keep her alive. Amen. After I prayed, I had a sweet assurance that God would do what He thought best.

Mama said I needed to put Mary in the barn, but for some reason I left the door open. Now, as I look back on it, I’m very thankful that I did. I came back into the house after putting her away, and Mama said that we needed to do some errands in town. I went with a heavy heart, knowing that most likely I would have to bury Mary when I got back. We were gone until about six-thirty in the evening. Mama drove down to the big barn so that I could put away the other animals. I went up to the field and started calling the goats and other animals. From the middle of the field I heard a baby voice calling. It can’t possibly be Mary! I thought. Then all of a sudden, out of the middle of the field, she came running to me. She was skinny! She started butting me for food. Shocked, I started running to Mama, who was waiting in the van. As we ran up to the front of the van together, Mama stared out in amazement. I was jumping up and down, and almost crying for joy! Mama and I thanked God for His wonderful miracle.