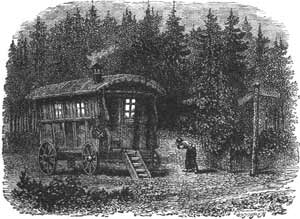 Rain, rain, rain! How mercilessly it fell on the fairgrounds that Sunday afternoon! Every moment the pools increased and the mud became thicker. How dismal the fair looked then! On Saturday evening it had been brilliantly lighted with rows of flaring lamps; and the grand shows had been illuminated with crosses, stars, anchors, and all manner of shapes made with the bright lights.

But there were no lights now; there was nothing to cast a halo round the dirty, weather-stained tents and the dingy caravans.

Yet, in spite of this, and in spite of the rain, a crowd of Sunday idlers lingered about the fair, looking with great interest at the half-covered whirligigs and bicycles, peeping curiously into the deserted shows, and making many schemes for further enjoyment on the morrow, when the fair was once more to be in its glory.

Inside the caravans the show-people were crouching over their fires and grumbling at the weather, murmuring at having to pay so much for the ground on which their shows were erected, at a time when they would be likely to make so little profit.

A little old man, with a rosy, good-tempered face, was making his way across the sea of mud which divided the shows from each other. He was evidently no idler in the fair; he had come into it that Sunday afternoon for a definite purpose, and he did not intend to leave it until it was accomplished. After crossing an almost impassable place, he climbed the steps leading to one of the caravans and knocked at the door.

It was a curious door; the upper part of it, being used as a window, was filled with glass, behind which you could see two small muslin curtains, tied up with pink ribbon. No one came to open the door when the old man knocked, and he was about to turn away, when some little boys, who were standing near, called out to him, “Rap again, sir, rap again; there’s a little lass in there; she went in a little bit ago.”

“Don’t you wish you was her?” said one of the little boys to the other.

“Ay!” said the little fellow. “I wish our house would move about, and had little windows with white curtains and pink bows!”

The old man laughed a hearty laugh at the children’s talk, and rapped again at the caravan door.

This time a face appeared between the muslin curtains and peered cautiously out. It was a very pretty little face—so pretty that the old man sighed to himself when he saw it.

Then the small head turned round, and seemed to be telling what it had seen to someone within, and asking leave to admit the visitor; for a minute afterwards the door was opened, and the owner of the pretty face stood before the old man.

She was a little girl about twelve years of age, very slender and delicate in appearance. Her hair, which was of a rich, auburn colour, was hanging down to her waist, and her eyes were the most beautiful the old man thought he had ever seen.

She was very poorly dressed, and she shivered as the damp, cold air rushed in through the open door.

She was just going to answer him when a violent fit of coughing from within caused her to look round, and when it was over a weak, querulous voice said hurriedly, “Shut the door, Rosalie; it’s so cold. Ask whoever it is to come in.”

The old man did not wait for a second invitation; he stepped inside the caravan, and the child closed the door.

It was a very small place; there was hardly room for him to stand. At the end of the caravan was a narrow bed something like a berth on board ship, and on it a woman was lying who was evidently very ill. She was the child’s mother, the old man felt sure. She had the same beautiful eyes and sunny hair, though her face was thin and wasted.

There was not room for much furniture in the small caravan; a tiny stove—the chimney of which went through the wooden roof—a few pans, a shelf containing cups and saucers, and two boxes which served as seats, completely filled it. There was only just room for the old man to stand, and the fire was so near him that he was in danger of being scorched.

Rosalie had seated herself on one of the boxes close to her mother’s bed.

“You must excuse my intruding, ma’am,” said the old man, with a polite bow; “but I’m so fond of little folks, and I’ve brought this little girl of yours a picture, if she will accept it from me.”

A flush of pleasure came into the child’s face as he brought out of his pocket his promised gift. She seized it eagerly, and held it up before her with evident delight, while her mother raised herself on her elbow to look at it with her.

It was the picture of a shepherd, with a very kind and compassionate face, who was bearing home in his bosom a lost lamb. The lamb’s fleece was torn in several places, and there were marks of blood on its back, as if it had been roughly used by some cruel beast in a recent struggle.

But the shepherd seemed to have suffered more than the lamb, for he was wounded in many places, and his blood was falling in large drops on the ground. Yet he did not seem to mind it; his face was full of love and full of joy as he looked at the lamb. He had forgotten his sorrow in his joy that the lamb was saved.

In the distance were some of the shepherd’s friends, who were coming to meet him, and underneath the picture were these words, printed in large letters:

“Rejoice with me; for I have found my sheep which was lost. There is joy in the presence of the angels of God over one sinner that repenteth.”* (Luke 15:6,10)

The little girl read the words aloud in a clear, distinct voice, and her mother gazed at the picture with tears in her eyes.

“Those are sweet words, ain’t they?” said the old man.

“Yes,” said the woman, with a sigh. “I have heard them many times before.”

“Has the Good Shepherd ever said them of you, ma’am? Has He ever called the bright angels together and said to them of you, ‘Rejoice with Me, for I have found My sheep which was lost’?”

The woman did not speak; a fit of coughing came on, and the old man stood looking at her with a very pitying expression.

“Yes, very ill,” gasped the woman bitterly; “every one can see that but Augustus!”

“No, he doesn’t see it,” repeated the woman. “He thinks I ought to get up and act in the play, just as usual. I did try at the last place we went to; but I fainted as soon as my part was over, and I’ve been in bed ever since.”

“You must be tired of moving about, ma’am,” said the old man compassionately.

“Are you always on the move, ma’am?” asked the old man.

“All the summer-time,” said the woman. “We get into lodgings for a little time in the winter; and then we let ourselves out to some of the small town theaters; but all the rest of the year we’re going from feast to feast and from fair to fair—no rest nor comfort, not a bit!”

“Poor thing! poor thing!” said the old man; and then a choking sensation appeared to have seized him, for he cleared his throat vigorously many times, but seemed unable to say more.

The child had climbed on one of the boxes, and brought down a square red pincushion from the shelf which ran round the top of the caravan. From this she took two pins, and fastened the picture on the wooden wall, so that her mother could see it as she was lying in bed.

“It does look pretty there,” said the little girl. “Mummy, you can look at it nicely now.”

“Yes, ma’am,” said the old man, as he prepared to take his leave. “And as you look at it, think of that Good Shepherd who is seeking you. He wants to find you, and take you up in His arms, and carry you home; and He won’t mind the wounds it has cost Him, if you’ll only let Him do it.

“Good-day, ma’am,” said the old man; “I shall probably never see you again, but I would like the Good Shepherd to say those words of you.”

He went carefully down the steps of the caravan, and Rosalie stood at the window, watching him picking his way to the other shows, to which he was carrying the same message of peace. She looked out from between the muslin curtains until he had quite disappeared to a distant part of the field, and then she turned to her mother and said eagerly, “It’s a very pretty picture, isn’t it, Mummy dear?”

But no answer came from the bed. Rosalie thought her mother was asleep, and crept on tiptoe to her side, fearful of waking her. But she found her mother’s face buried in the pillow, on which large tears were falling.

The little girl sat down by her side, and tried to comfort her by stroking her hand very gently, and saying, “Mummy dear, Mummy dear, don’t cry! What’s the matter, Mummy dear?” But her mother only wept the more.

At length her sobs brought on such a violent fit of coughing that Rosalie was much alarmed, and fetched her a mug of water, which was standing on the shelf near the door. By degrees her mother grew calmer, the sobs became less frequent, and, to the little girl’s joy, she fell asleep. Rosalie sat beside her without moving, lest she should awake her, and kept gazing at her picture till she knew every line of it. And the first thing her mother heard when she awoke from sleep was Rosalie’s voice saying softly, “ ‘Rejoice with me; for I have found my sheep which was lost. There is joy in the presence of the angels of God over one sinner that repenteth.’ ”