With Love, from the Editress 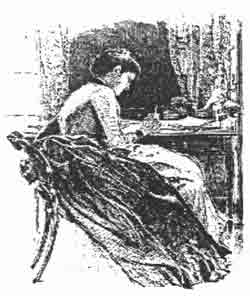 I climbed out of the car and slowly walked up the walk and into the house. Once in my room, I lay down my Bible and songbook and removed my sweater. Then returning to the front of the house, I sat down on the couch and mechanically began folding blankets from the little girls that I had baby-sat last night.

“Yes,” I replied, again pushing back the tears that had threatened to spill over more than once that day.

The day had been long and tiresome—a usually encouraging Sunday had been spent listlessly, almost endured. Nobody had tried to discourage or slight me—why then this feeling? A feeling I couldn’t quite label? A feeling of discouragement, of loneliness? A tiredness of that which you don’t care or feel like going on being an example, or to speak up when it would be so much easier to be silent. A tiredness that tells you how much easier it would have been if you had not committed yourself to such and such. A discouragement that makes you disappointed in yourself, of progress you wish you could make on your Christian life, of battles that you think you’ll never win. Coming to the realization that you are learning lessons over again that you had thought you’d mastered long ago. Why did I have these feelings?

I folded and put away another blanket.

“Nothing,” I murmured half to myself. Why did I feel so depressed? Hadn’t I got several letters of encouragement lately? Hadn’t the Lord supplied the means to even print the last issue of Dear Princess? Then why this feeling?

I returned to my room and took down my book Dear Princess and stared at it dumbly for a few minutes, conversations replaying over and over in my mind like a broken record. I didn’t feel like opening it. Returning the book to the shelf I stared out the window listlessly… thinking of all the things I needed to do next week.

“As thy days, so shall thy strength be.”* (Deuteronomy 33:25) The words fell on my ear like a bomb being dropped. It was almost like someone in the room had spoken to me, I heard them so clearly.

Other snatches of scripture entered my mind, “Commit thy way unto the LORD; trust also in him; and he shall bring it to pass…. Rest in the LORD, and wait patiently for him…. The steps of a good man are ordered by the LORD: and he delighteth in his way. Though he fall, he shall not be utterly cast down: for the LORD upholdeth him with his hand.”* (Psalms 37:5,7,23-24)

Oh, what beautiful promises! But it is easy though, like Peter, to get our mind off the promises and look around at the crashing, rolling waves that could sweep us under. We look at the problems, the trials around us, and forget that the Lord has promised to uphold us, to strengthen. We look at the waves and not straight at Jesus’ face. Why do we do this so easily? It is not that we want to get our eyes off Jesus face and to look around us… but why then do we?

Do we have to go through times of discouragement and failures all the time? Is it impossible to keep our eyes on Jesus all the time?

From what the Lord has shown me, yes, there always will be things to get discouraged about. If we start looking at the trial, all the discouraging things about it, all its problems, we can’t look straight at Jesus.

Daddy always told me that there are two ways to go through a trial; one way is to work the trial and the other is have the trial work you. To have you work the trial is to look to Jesus, to keep your eyes fixed on Him and Him only.

To have a trial work you is to do what I was doing—letting the comments that had made me discouraged, dig in and fester.

To have a trial work you is to look at the waves coming upon you, to take your eyes off Jesus, to get swept under all the problems that Jesus intended for you to rise above. It’s no fun to be worked by a trial. The encouraging things of the day seem depressing, arguments start, and things get said that no one intended to say.

Too often, I’m afraid, the reason we get discouraged is that we look at the size of the trial and get scared and try to take things into our own hands, instead of resting in the Lord.

I found a passage in The Lure of Divine Love that could express this thought better than I ever could:

We were living out on the frontier, forty miles from the nearest hamlet. There was a fair mountain road, but Husband conceived the possibility of driving over the mountainside along the Rock Creek Canyon, so as to visit an old friend who lived there.

He was well acquainted with the country, from riding after stock. But he found it to be a most hazardous undertaking by vehide. There was a long stretch on that mountain trail so steep and sidelong that it seemed that the whole outfit would roll down the mountain side. (It was only merciful Providence that prevented it.) There was no way back, there was no way even to stop, there was nothing to do but keep going. The horses did nobly, the brake held and worked fine, but the hind wheels would slide, and the upper-side wheels would be off the ground at times. And that great canyon lay in purple shadows a mile or more below.

It was a frightful situation. Husband’s face was white as death, and I clasped my babe to my bosom with a fluttering heart. Husband was an expert horseman, and I had the utmost confidence in him as a driver, and very little in myself, and yet at two different times I involuntarily reached out, with that feeling as if I must take the reins from his hands, but it would have been sure destruction if I had. There were no words exchanged, but after we had passed the extreme danger he silently handed the reins over for me to take and to do the driving, and I recall even now how I felt as I drew back, saying, “Oh, no, no, no! I don’t want to take the reins.”

I never forgot the realization I had of the frightful consequences, if I had taken the reins into my own hands on that dangerous mountain side with that great, rock-ridged canyon far below.

And you see, I believe it is that way with us—involuntarily we reach out to take hold of the trial, but it is too big for us—we cannot take it. Then it works us down, because we did not give it to One who can handle it.

There are two other ways that can be very discouraging just to think about that the Lord has seemed to burden me to share with you.

The first is to do what I was doing—looking ahead at the future.

It is always discouraging to look ahead and realize that you’ve had too much planned. Have you ever thought to yourself, “I’ll never get all that done! Oh, dear, how am I going to do…?” Inevitably you’ll get discouraged when you think about it that way. Why? Because we get out of God’s umbrella. He has only promised us grace for—when? Today. This hour. This moment. What would it be like if God let us see all the trials we would have when we are married (granting that that is His will for our lives)? Could we bear it? Most certainly we could not. Why? Because He has only given us the grace we need for in our lives right now. He will give us the strength for those trials when we come to them. “Take therefore no thought for the morrow: for the morrow shall take thought for the things of itself. Sufficient unto the day is the evil thereof.”* (Matthew 6:30-34)

One other thing that can make us discouraged: looking back. Have you ever looked back at the week where you’ve been tried and pressed and scanned all your failures? Does that make you feel encouraged? I know it doesn’t make me feel uplifted to know I haven’t done something right. Looking back at a failure is all right if you are looking at it in order to learn something from it. But to simply dwell on some mistake you’ve made can be extremely discouraging. When you get discouraged over a mistake or a failure, and let your mind think about it, you let the devil take an advantage over you. He magnifies the failure till it looks like a mountain. He wants to make you so discouraged that you feel that you’re unable to live for the Lord.

But it takes courage not to look back at our mistakes and simply go on, trusting the Lord and asking Him to help us to live closer to Him. Not look at yesterdays problems and perhaps how we did not handle them as well as we could have. That was yesterday. I have today to work on now.

I pray that you will have been blessed by what I have shared with you, and I desire your prayers that I will keep my eyes fastened on Jesus, for surely how worthy He is of our trust.

Your sister in Christ Jesus,
Abigail

Postscript: In regard to the unasked question, “Why the title ‘From the Editress’?”: editor is masculine, editress is feminine, so….