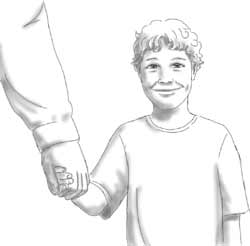 “I’m not boss anymore,” my little friend told me. We were sitting in the strawberry field and the conversation had recently turned to ages and relationships. I had just explained that being the oldest in my family meant that I needed to be a helper. From all the wisdom of his four years, he agreed. After all, he was the oldest in his family, too. “And I’m not boss anymore,” he said.

“Who is boss in your family?” I asked, curious to know his perspective.

“And who was boss before?”

A hint of a chuckle crept into his voice when he replied. “I guess it was me.”

“So why aren’t you boss anymore?” I asked. His observations were fascinating me.

It was a profound thought. He had pinpointed the true mark of maturity alright: when we are “big” enough to know that someone else is boss, that we need to be taught and led.