The Ocean of Life

The warm and sultry day was drawing to a close. Long shadows stretched across the countryside. The lowing of cows waiting to be admitted into the barn-lot could be heard, and among the honeysuckle vines the dull droning of bees told that their labor for the day was nearly ended.

Down the dusty road in the gathering shadows a lad of sixteen summers was hurrying along. One could plainly have seen that the boy was from a good home; for his clothing bore the marks of a loving mother’s care, and his brow was high and noble. In his countenance there was a frank and open look, but his brow was drawn as if he were in deep thought, and a close observer could have detected a look of unrest and guilt. Now and then he looked behind him as if expecting to see someone coming. He had a long way to go and was anxious for a ride. No one being in sight, the look of expectancy in his face gave way to that of disappointment.

At the crossroads, after looking in each direction, he stood for a moment trying to decide what would be best to do. “By cutting across these fields,” he reasoned with himself, “I shall save much time and strength.” He was soon over the fence that surrounded the pasture and speeding across the rich meadows. He did not stop to look toward the large barn at his left nor toward the farmer nearby calling to his cows. The boy was known and respected by the farmer and he knew that crossing the meadow would not be accounted as trespassing, and this evening he had no time for conversation or delay.

He soon reached the other side of the pasture, and climbing the fence, he entered a field through which a small creek was flowing. Many times he had played along the banks of this stream with his little brother and sister, and the pleasant memories of strings of fish and little frolics came before him. For a moment he hesitated, looking down into the sparkling water to see if a fish was in sight. Then he hastened on. 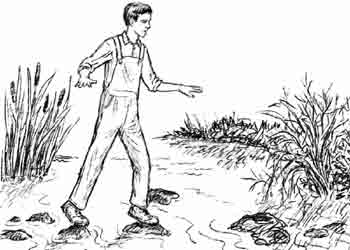 Coming, at last, to a shallow place, he sprang from one stone to another and soon reached the opposite bank. He sprang lightly over another fence and passed through a large cornfield, keeping between the rows of knee-high corn. He entered the woods on the other side, following the path that wound in and out among the great oaks and maples. On and on he went, until he came to another stream—a deep river, somewhat swollen by recent rains. The boy, familiar with the whole area, knew of a foot log a short distance away. He realized, however, that the log would be slippery and that in the deep shadow of the forest he would have difficulty in crossing even with the aid of the handrail. But he had no time to go to the bridge farther up the river.

As he stepped upon the log, a strange feeling of fear and dread swept over him. The water beneath appeared so dark and chilly. An owl hooted in the distance and caused him to start; then a whippoorwill began its evening song, and he trembled.

“What is it?” he asked himself. “I am no coward! It must be the stillness of the evening and these darks woods that cause me to feel so strangely!”

Again he cast hurried glances up and down the river, and, nearing the center of the stream, he stopped to listen. All was silent save the river. He could hear the rushing and swirling of the waters below the rapids a short distance away, and he heard something else.

The voice of his conscience was speaking to him. It was warning him in almost audible tones of the dangers that he might soon meet if he continued his trip. This voice was also giving him hints of the future if he continued to follow the course in life that he had chosen.

There were many dangers ahead of him—dangers that in his own strength would be very difficult, if not impossible, to overcome; dangers that would need an experienced eye to detect and that would wreck his soul if he had no Pilot to guide him through the great ocean before him.

As he listened to the voice, the form of one he dearly loved arose before him. She, too, had warned him of danger and her words were still clear and distinct in his memory. Her warnings had been not only of the penalties connected with crime but also of the effects of sin and wickedness of every sort upon the human mind, body, and soul. And she had taught him how to avoid the errors that so often lead the young astray and cause them misery and sorrow. She had also urged him to make the right preparations before starting out in life for himself.

“The ocean of life is deep and wide, Byron,” she had said. “You cannot cross it easily or in a moment of time. The other shore is safely gained only by those who understand the dangerous rocks and shoals, and who can brave the dangers of the deep. Therefore everyone should let Jesus, through the Holy Spirit, pilot him in this voyage that we all must take.”

In fancy he could still see her near the gateway at home, begging him with tears in her eyes to change his plans for the night, and then, like a flood, came his own cruel words surging in upon him—“Mother,” he had said, “I am almost a man, and I ought to have some responsibilities in life. I think I am old enough to decide some things for myself.”

And then he seemed to hear again her answer, “My son! Oh, how I tremble for you! I am afraid that if you follow out your plans tonight you will fall into company that will do you harm! The boy that you wish to spend the night with is not the sort of person with whom you should associate. I cannot give my consent to your going. If you go, it is against my wishes.”

And he had rudely answered, “Now, Mother, you’re doing James an injustice when you speak of him as you do. He is all right. You can say what you please, but I am going anyway. You are always trying to tell me what I ought not to do, but I’m not going to be a sissy any longer. I’m going to take things into my own hands tonight and decide for myself. I won’t be babied any longer! Here I have wasted an hour waiting for your consent. It’s now past time for me to start! I should have been well on my way by this time. I shall not wait a moment longer to hear more of your argument.”

And then his mother’s farewell words repeated themselves—“Goodbye, my boy, goodbye! Remember, I shall pray for you tonight.” He could hear the echo vibrating through the air: “Goodbye—pray—tonight—pray—pray—”