Note: This is a made-up story about a Jewish boy who lived in Israel when Jesus lived there. In the story, Ethan is pronounced “AY-thawn,” Tobi is “TOE-bee,” and Mesha is “MAY-shaw.” A Rabbi is a Hebrew name for “Teacher,” and a Levite is one of the people God chose to specially serve Him in the temple. I do not think that Samaritans would live in Galilee, because the Jews disliked them so much, but I put one there for the story.

It was the second day when they crossed the border into Samaria, and Ethan looked around curiously. What was the Rabbi’s purpose in this place? Samaria was the land of those horrid dogs who had twisted the Law, but still claimed to be followers of the Lord God. They even worshipped God on a mountain, saying that it was better than Jerusalem! Rabbi Jesus was not turning out like he had expected. Somehow he was different from Ethan’s dreams of a Messiah; but how? He spoke of peace and love. Was he not their conqueror after all?

“Ethan! Do you know that Rabbi Jesus has sent some men to that Samaritan town over there? They’re goin’ to ask if we can stay the night!” Mesha pushed her way through a group of women to reach Ethan’s side.

“What do you think of it?” Ethan asked with a frown.

“So the Rabbi doesn’t act like a Jew,” cut in Ethan, “but what are you going to do about it?”

Mesha stopped in surprise. “Oh… well, I guess we can’t do anything, really. But, Ethan, I thought you liked the Rabbi.”

Mesha opened her mouth to say something, but then shut it again. Silence hung between them like a thick blanket, and Ethan scuffed at stone in the road. He felt angry—angry at Mesha for telling things, angry at the Rabbi for mixing everything up, angry at himself for arguing with Mesha.

They walked on without speaking, each thinking their own thoughts. Ethan wished the knot of unkind feelings and frustration in his middle would go away. He wished he’d never have to meet a Samaritan, or go to one’s house. Then he remembered Tobi, who had stayed home to watch the sheep; but he quickly pushed that thought away.

Dusk was falling, and the air was chill when the message buzzed through the weary caravan of travelers, “The Samaritans won’t let us stay—that’s because we’re heading for Jerusalem, don’t you know? Cruel rascals, that’s what they are!”

The news didn’t make Ethan any happier. He was hungry and tired and cold. A good warm supper would’ve tasted good.

“So what are we going to do?” Mother was asking.

“The Rabbi has said we will go to the next village,” another woman replied.

“Unclean! Unclean!” The wretched call sent shivers down Ethan’s back, but still he hurried through the crowd to join the men standing near the Rabbi. Ethan looked up at his compassionate face and felt his heart pound. Not over a hundred feet away crouched ten men—beggarly, dirty, untouchable lepers.

“Jesus, Master—have mercy on us!” they pled. What would Rabbi Jesus do?

“Go, show yourselves to the priest!” the Rabbi commanded.

That was what people did when they were healed, but these were lepers! Around him, Ethan heard the murmuring of the crowd, but the Rabbi and his followers stood calmly. Slowly the lepers turned, and then hobbling and stumbling, they made off toward the nearby village. 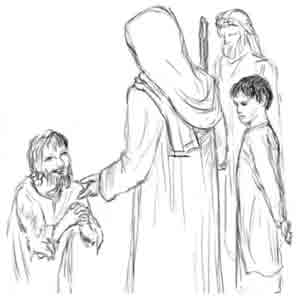 Then all of a sudden, a glad shout rang out, and Ethan gazed in amazement at the returning figure of a man. It was one of the lepers, or was it? He didn’t hobble or groan, but came straight up to the Rabbi and fell at his feet.

“Thank you, Master! Oh, praise the Lord God for healing me!” Tears of gladness fell down the man’s cheeks, now made new and whole like any other man’s.

“But the others?” the Rabbi questioned. Ethan saw him look up at the murmuring crowd that was pressing around and smile sadly. Then, raising his voice, he said, “Were there not ten made clean? Where are the nine others? No others have come to give glory to God, but this stranger.” Ethan glanced quickly from the Rabbi’s kind face to the healed man at his feet—a Samaritan. But Samaritans were dogs, they were horrid rascals—

Suddenly Ethan felt like hiding. Surely the Rabbi would see him and know how he felt, what he was thinking. Somehow Ethan didn’t want Rabbi Jesus to know. Ethan squeezed his way to the edge of the crowd and started back toward the loaded mules and baggage; he must get away from it all. Leaning against an olive tree, he clenched his fists and closed his eyes. Pictures came back: the Rabbi feeding the crowds on the lake side, the dreams of a conqueror, the hateful thoughts, the last two days traveling in Samaria. But the healing of that Samaritan was the most puzzling of all! Surely the Messiah was only for the Jews. Surely the Rabbi’s kingdom would be a conquering one. No, he wouldn’t give up his dreams. Never! But the Rabbi’s teachings were not to Ethan’s likings at all.

As they continued south, he kept out of Rabbi Jesus’ way as much as possible; since their argument, he didn’t talk much with Mesha either. When they entered Jerusalem the next afternoon, Ethan tried to forget the Rabbi all together. The city was large and filled with people preparing for the feast: Jews that had come from all places to celebrate and set up their booths, merchants and shop keepers who were selling their wares, and the Roman guards that stood posted at every corner. Those Romans were another trouble—but what would the Rabbi say about them? Somehow, Ethan couldn’t forget about the Rabbi.

As he helped his father get ready for the feast, Ethan kept wondering who the Rabbi was after all. While they were working on their booth, he got up the courage to ask, “Father, do you really think the Rabbi is the Messiah? Is he our conqueror, or not?”

Father stopped twisting the willow branches. “I don’t rightly know, son. His teachings are different from those we know and teach. But somehow…” his voice trailed off. Ethan saw his father’s eyes looking far, far away—beyond the hillside crowded with waving green booths and the bustling city. Finally, he spoke. “Yes, I believe this Jesus is the Messiah. But what he will do, I cannot tell.”

“I have heard that he is now staying with Cousin Philip,” Uncle Ruben said then. “Why don’t we go and hear more of what he is teaching? 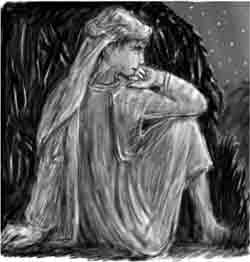 Ethan’s father and uncle went that night, but Ethan didn’t go along. He sat outside the booth by himself. Mother, Mesha, and the aunts were all chatting away inside, so he had come away for some peace and quiet. For a long time, he sat there in the cool air and watched the stars come blinking out between the foggy gray clouds. But the words of Rabbi Jesus didn’t leave him, and in his middle, there was tight, cold feeling that wouldn’t go away.

Ethan knew what he must do. He knew that he would have to give up his dreams—and his hatred and anger. Those mean thoughts about the Samaritans would have to go, if he would ever feel any peace. That is what the Rabbi would want him to do.

But he couldn’t. The mean thoughts were still there; no matter how he tried, he couldn’t get rid of them. Ethan saw again the gentle good face of the Rabbi and wondered. What was his purpose? If he hadn’t come to conquer the Romans and throw out the Samaritans, what did he come to do? Now Ethan wanted to know; he had to know.

From inside the booth, Aunt Elizabeth’s muffled voice broke through his thoughts. “…I thought that’s what Andrew said, but I’ll just have to ask him. The Rabbi would know.”

That was it! He must find the Rabbi. Scrambling to his feet, Ethan started off toward Cousin Philip’s booth.

The place was dark and crowded, but Ethan could see Rabbi Jesus sitting with his followers by the merry flames of a cooking fire, one hand raised as he spoke. Ethan found a place next to a wall post where he could stand and listen. Looking at the Rabbi’s face, glowing in the light of the fire, he remembered how loving and kind he had been to the sick and the poor Samaritan. He remembered how he had taught them to do good and forgive. Deep down inside, Ethan wanted that.

Looking around the room, Ethan saw a man stand to face the Rabbi. He quoted the scripture about loving the Lord God with all your heart, soul, strength, and mind, and loving your neighbor as yourself. The Rabbi answered, “You have answered right: do this and you shall live.” 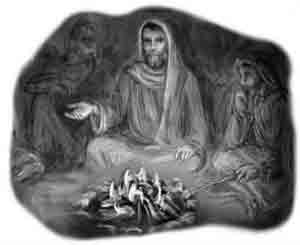 “And who is my neighbor?” the man said, narrowing his eyes. But Rabbi Jesus didn’t seem to notice the sneering voice, for he had settled back and begun a story. Ethan listened intently to catch each word. It was about a man that had been robbed by bandits on the winding mountain road to Jericho. And after being beaten up, he was left to die. By chance, a priest came down that road—but he hurried by without giving any help. Then a Levite came by, who surely ought to have helped, but he also ignored the poor bleeding man. In the end, it was a kind Samaritan who cleaned the hurt man’s wounds and cared for him.

“Now,” said Rabbi Jesus, “which of these three, do you think, was a neighbor to the robbed man?” He looked from the man, that had questioned him, to the crowded listeners. An uncomfortable silence filled the room. For a moment, his gaze met Ethan’s, and there was such a loving, kind look in his eyes that Ethan felt tingly all over.

Rabbi Jesus knew, and Rabbi Jesus loved him anyway. Ethan felt so sorry for every mean thought he had had; and, somehow, the Rabbi knew that, too. In the Rabbi’s eyes was a promise, a promise to help him do right, to love, and to do good. Surely, he was their conqueror—but it was anger and hate in the heart that he had conquered.

A warm glad feeling filled Ethan’s heart as he left Cousin Philip’s booth that night. The cold ache was gone, and how happy he was! He thought of Mesha; she must hear of their conquering Messiah, too.