Another true story about Gramps as a boy

Mark thought that he was really, really smart. His Mother and Daddy were always telling him things to do, but he thought he was so smart that he knew better. “Disobedience can cost you your life,” his Mother told him. She knew that his disobedience was going to get him into trouble. It always does.

In the summertime, Mark hated to go to bed at the end of the day. But Mother would have him put on pajamas and get into his bed while it was still light! It was unfair, Mark thought. Mother and Daddy didn’t have to go to bed. Usually, they sat in the kitchen around the table, talking and staying up as late as they wanted. Mark decided he would stay up, too. 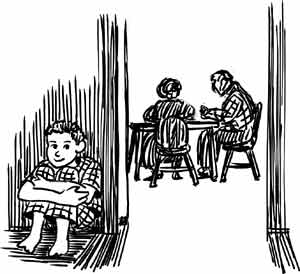 Mark’s bedroom was next to a small dark hallway that had a noisy attic fan in the ceiling. At the end of the hall was a door that opened to the dining room. If Mark moved very quietly, he could sneak through the dining room and sit down by the doorway to the kitchen. Then he could hear everything that Mother and Daddy said. It was the greatest fun to be out of bed and not have anyone know.

That is, it was fun until Mother suddenly decided to check on Mark. She would get up suddenly, and appear in the doorway, and he would be caught disobeying. “Back to bed this instant!” she would say.

But Mark didn’t mind. Next time he would be more careful so he wouldn’t get caught. He did not want to obey in his heart. He thought that he knew best.

One summer night, Mother had caught him twice. She warned him, “You had better stay in bed this time, young man! If you don’t, something bad is going to happen to you.”

This went right in one of Mark’s freshly-washed pink ears and out the other. What could happen that was so bad? He would just be sent to bed again if he was caught. He would be more careful than ever. 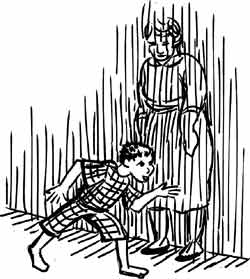 He was. He eased himself out of bed so very, very carefully that the springs did not squeak even once. He slipped across the wooden floor, and crept into the dark hallway where the attic fan roared. He could see the light streaming from the kitchen door. He started down the hallway, and suddenly the wall came alive! It turned into a great black shape that lunged at him and hollered, “Boo!”

It wasn’t the wall, after all. It was Mother. She had hid there and patiently waited for him to disobey. She knew he would. She caught him and took him back to bed. She told him some more about the dangers of disobedience. I think some of it got through to him that time.