A Cry for Help

Timothy discovered a new game. He would kick the ball as hard as he could, and Josh would run and get it. He would bring it back to Timothy, and then Timothy would kick it again.

This was a fun game. Timothy loved to see how far he could kick the ball, and Josh loved to run and get it. The higher it went in the air, the happier Josh was. He would clap his hands and laugh.

The ball went over a bush, and Josh giggled with glee. Then Timothy kicked it on the roof of the house, and it rolled down and bounced higher than Timothy. Timothy kicked it again, really hard, and it flew across the yard and hit the neighbors’ chain link fence. 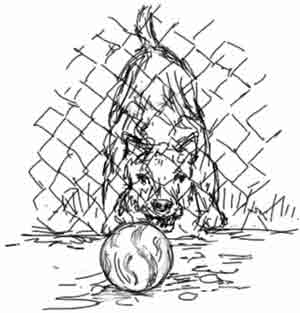 The boys ran over to get the ball, but a low, fierce growl stopped them. On the other side of the fence was the neighbors’ big dog. The dog stared at them, and growled through his teeth. Suddenly he ran at the fence, barking madly, and jumped up against the wire, hooking his claws into the links.

Timothy thought of the hole under the fence down by the corner. “Run, Josh!” he screamed and grabbed his little brother by the hand. He half-dragged, half-ran with him toward the house. The angry snarling of the dog sounded fainter for a moment. Timothy looked over his shoulder just in time to see the dog furiously work his way under the fence and leap toward them.

It was just a little farther to the house, but suddenly Timothy missed his step and he felt his ankle twist. He fell down, and Josh fell down, too. Timothy rolled over on his brother and hugged him.

“Dear Jesus,” he prayed, “help us now.” The tears filled his eyes, and he waited for the big dog to bite him.

There was a snapping, zipping noise from the back porch and the dog made a terrified yelp. There was the sound of running dog feet, going away. Then that strange snapping noise came again, followed by a burst of frenzied yelping. The chain link fence rattled and then all was quiet.

Timothy looked up to see Mother standing beside them. In one hand she had a strange, Y-shaped wood thing attached to part of a huge rubber band. In the other hand Mother carried two big steel marbles. They felt really heavy when Timothy held them. 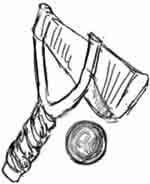 “I didn’t know you could do that,” he said, when Mother showed him how to shoot one of the steel balls at a tree with the slingshot. The big silver ball hit the tree so hard that it knocked off the bark and bounced over and hit the garage with a bang. You could see the dent where it hit the metal door.

“I wasn’t sure that I could, either,” Mother replied. “I prayed and asked the Lord to help me when I made the first shot.” And all of them knew that the Lord had helped them.